DURA Automotive Systems has announced a comprehensive restructuring of the company into four global business units. 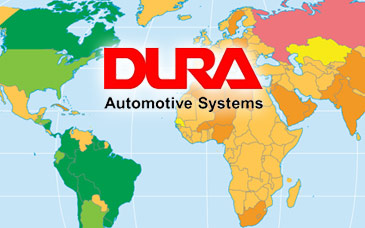 “Macro-economic conditions affecting the global automotive industry have dramatically altered the way automotive suppliers need to do business around the world,” said Tim Leuliette, DURA’s president and chief executive officer. “Today’s announcement of our move away from a regional structure into four global business units will further enhance our efficiency and ability to compete as one global company. We are confident these actions will strengthen our ability to serve our worldwide customers and grow our business. DURA is now a lean, globally balanced technology leader.”

Following its emergence from Chapter 11 in June, DURA expects to complete the last of its previously announced plans to close or exit 16 manufacturing facilities worldwide. The company said these closures, combined with the elimination of $1.2 billion, or 85 percent, of the company’s debt and a 90 percent reduction in cash interest expense, as part of the reorganization plan approved earlier this year, have laid the groundwork for a new, lean and globally competitive DURA.

• Cable Systems, headquartered in Rochester Hills, Mich., is one of the world’s largest producers of light and heavy-duty automotive control cables. The Cable Systems Division has operations in Germany, Romania, the Czech Republic, Portugal, United States, Mexico and China. Leading the division will be Al Malizia, as vice president and general manager. Malizia joins the company after retiring from Metaldyne Corporation, where he served as vice president and general manager of North American Chassis Operations.

In 2008, the company anticipates generating approximately 59 percent of its revenues from Europe, 33 percent from North America and 8 percent from the rest of the world.

As a result of DURA’s Chapter 11 reorganization, which was completed on June 27, the company was unable to file its financial statements with the SEC in a timely manner. The company intends to “catch up” on those filings with the issuance of the 2007 10Qs and 10K by the end of October 2008. The 10K will include a “Fresh Start” pro-forma balance sheet showing the impact of the financial restructuring and the elimination of $1.3 billion of liabilities. Within 60 days after that, DURA expects to complete its 2007 statutory filing in relevant jurisdictions and to file its 2008 first quarter 10Q. The actual effect of “Fresh Start” accounting will be reflected in the company’s 2008 second quarter statements, which DURA expects will be completed approximately 60 days later. Given this process of “catch up”, the company currently believes it will be on a timely reporting schedule for its 2009 second quarter.