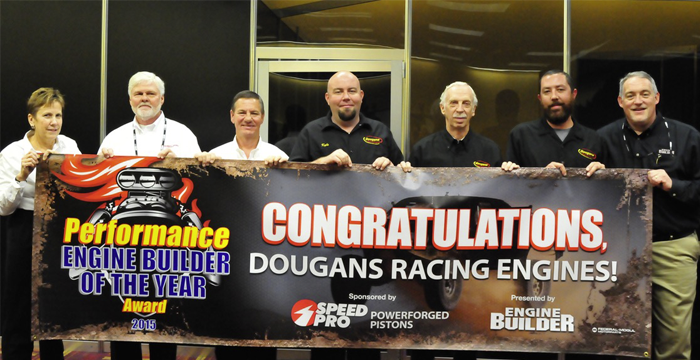 The California shop received this annual award from Engine Builder magazine during PRI Show in Indianapolis.

Dougans specializes in building high-performance engines for circle track racing, drag boat and off-road competition, including the SCORE (Sanctioning Committee Off-Road Events) Trophy Truck and World Desert Championship series. During the 2015 race season the company built and maintained engines and provided track support for as many as 40 SCORE teams. Dougans utilizes Federal-Mogul Motorparts’ Speed-Pro engine components and Fel-Pro gaskets in many of its engines.

“Ray and the Dougans team are known for building championship engines that combine maximum performance and exceptional durability,” said Raymond King, global director, engine and sealing, Federal-Mogul Motorparts. “This year, they built engines for four of the top five teams, including the series champion, in SCORE Trophy Truck racing. Their continued commitment to excellence is what this award and the Speed-Pro and Fel-Pro brands are all about. We are proud to reintroduce our enhanced and expanded lineup of POWERFORGED pistons to North American engine builders by presenting this important award.”

Field received an extensive prize package of Speed-Pro products, merchandise and gear, as well as marketing packs for his customers.

Runner-up in the Performance Engine Builder of the Year program was Matt Dickmeyer, who, along with his wife, Jennifer, owns Dickmeyer Automotive, a successful engine building and general repair shop in South Whitley, Indiana. Finishing third was Bruce Yackey, president of Greeley Automotive Machine in Greeley, Colorado, which next month will celebrate its fourth decade of engine building excellence.

Available in weight-matched sets that are each accurate to within +/- 2 grams, Speed-Pro POWERFORGED pistons are an excellent choice for ultra-high-output racing and street performance applications, Federal-Mogul says. Each piston is forged under 3,000 tons of pressure for optimal material flow and ductility and features micro-accurate ring grooves as well as Federal-Mogul Motorparts’ latest computer-generated skirt profiles, which permit tighter wall clearances.

To learn more about the Performance Engine Builder of the Year contest, visit TopPerformanceShop.com.