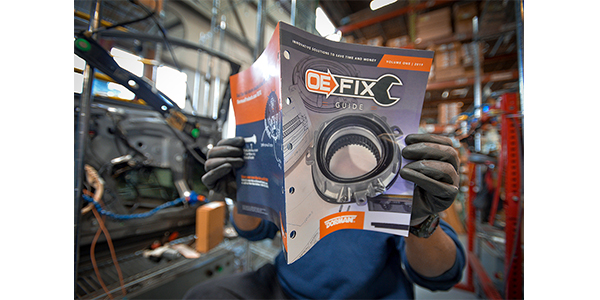 When an original equipment part fails, Dorman hopes that every automotive repair professional knows to check its catalog first for a reliable direct replacement, instead of going back to the dealership. But what if the original design could be improved? And what if replacing the original requires advanced tools, or removing all kinds of other equipment just to fix a failed component? It might take hours to replace, if you can do it at all, only to replace that same part again soon. Solving these concerns became the impetus for Dorman creating its OE FIX products.

Now, technicians can learn more about these innovative solutions in Dorman’s OE FIX Guide. This new publication tells the stories behind dozens of OE FIX products, showing how Dorman engineers diagnosed failure points in original designs, and found ways to simplify replacement or make upgrades to increase performance and reliability.

“Many counterpeople and service technicians know to check Dorman first whenever they need a replacement part, but we want to make sure they also know why to choose Dorman first,” said Dorman President and CEO Kevin Olsen. “This new guide perfectly showcases all the creative ways we design and engineer parts to solve common repair problems.”

An OE FIX is a Dorman-engineered part that is exclusive upon release and improves on an original equipment design, according to the company.

Dorman says OE FIX products add value in multiple ways, such as by strengthening materials to prevent future failures, modifying design to reduce installation time or allowing replacement of only the failure-prone component instead of an entire assembly.

Dorman has always featured OE FIX parts in each of its monthly New Product Announcements, which are emailed to tens of thousands of warehouse distributors, jobbers, counterpeople, service technicians and do-it-yourselfers. These parts also are highlighted on Dorman’s website with the trademark wrench-shaped OE FIX logo. This new guide organizes many different OE FIX parts released in recent years, and describes them in more depth, with extended details and even feature stories on some of the most popular favorite fixes.

“We always hear from counterpeople and service techs that they love these OE FIX ideas, but it’s tough to tell the whole story in only a couple bullet points in a standard catalog,” said Tom Donoghue, Dorman’s vice president of marketing. “The new OE FIX Guide really allows us to tell these design and engineering parts stories in the detail that our customers want.”

The OE FIX Guide is currently being distributed through Dorman customers, including major retailers and automotive shops throughout North America. You can also view an interactive digital edition, along with other OE FIX videos and multimedia, at DormanProducts.com/OEFIX.

Advertisement
In this article:Dorman
Print
Up Next: