WASHINGTON, D.C. – A stipulation in their request for financial support, Ford, General Motors and Chrysler yesterday submitted to Congress their business plans, which included detailed roadmaps for returning to profitability. 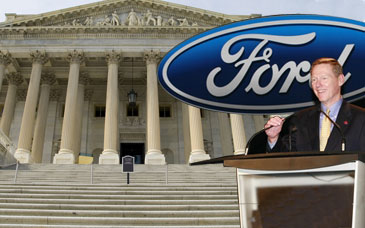 In their presentations, both Chrysler and GM indicated that they could collapse by the end of the month without financial assistance.

GM said it needs $4 billion immediately, just to continue operating through the end of the year, and needs $18 billion in loans, in total. Chrysler is asking for $7 billion by Dec. 31, according to a report from the Wall Street Journal.

Ford is asking for access to up to $9 billion in bridge financing, but reiterated that it hopes to complete its transformation without accessing the loan should Congress agree to make the funds available.

Despite the serious global economic downturn, Ford said it does not anticipate a liquidity crisis in 2009 — barring a bankruptcy by one of its domestic competitors or a more severe economic downturn that would further cripple automotive sales and create additional cash challenges.

"For Ford, government loans would serve as a critical backstop or safeguard against worsening conditions, as we drive transformational change in our company," said Ford President and CEO Alan Mulally, testifying before Congress this week.

All three automakers promised to consolidate manufacturing and speed up production of higher-mileage vehicles, the Journal reported. GM and Ford also said they will eliminate certain brands.