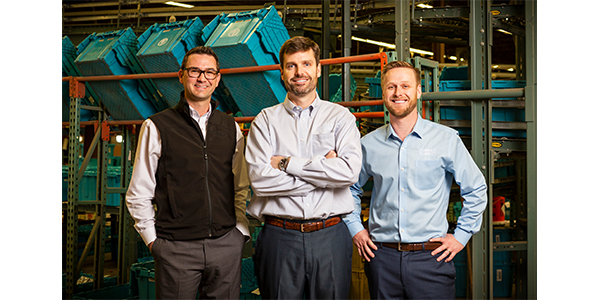 Lord, along with Ben Butler and Crow Lord, will continue as the fourth-generation of leaders at the company, which is celebrating 100 years in business.

Little Rock, Arkansas-based Crow-Burlingame – one of the largest Bumper to Bumper affiliates in the country – has appointed Fletcher Lord III as president of the family owned company that is marking its 100th anniversary this year. Lord, who has served as vice president since 2012, takes over the role of president from Bill Schlatterer, who will continue to serve as CEO for Crow-Burlingame.

Crow-Burlingame is a leader in the replacement auto parts industry with 177 company-owned stores and three warehouses serving seven states across the South.

In addition to the appointment of Fletcher Lord III as president, Senior Purchasing Manager Ben Butler has been named chief operating officer and Crow Lord, currently serving as district manager, has been named vice president regional sales. The company made the leadership announcement at its annual conference in Little Rock for vendors and the company’s 1,250 employees from Arkansas, Louisiana, Missouri, Oklahoma, Texas, Mississippi and Alabama.

“Not many companies can remain family owned after 100 years, but family is at the core of who we are at Crow-Burlingame,” said Chairman of the Board Fletcher Lord Jr., whose grandfather started the business. “Our family approach to business doesn’t end with our leaders either. We have employees and customers who have been with us for decades and they’re part of our family too. We treat each other like family and that has set our work apart for the past century. We now look forward to the vision this fourth generation of leaders will bring Crow-Burlingame in the century ahead.”

Lord Jr., who served as president from 1974 to 2012, will continue to serve as board chairman for Crow-Burlingame. In addition to 52 years of service to the company, he also has served in key industry-wide roles throughout his career, including three terms as chairman of the board of the Aftermarket Auto Parts Alliance, a $3.2 billion dollar marketing and buying group, and as chairman of the board for the Automotive Warehouse Distributors Association, the largest industry association representing more than 600 warehouse distributors across the country.

“Our commitment to customers and our people has helped us grow from that first small store in Little Rock, Arkansas, back in 1919, to a leader in the national aftermarket parts industry,” said Fletcher Lord III. “We’ve seen a lot of change over those 100 years, just like the evolution of the automobile, but we’ve never forgotten who we are or who we’re here to serve. That same commitment will make us even stronger as we look to the future and introduce Crow-Burlingame and our values to the next generation of garage owners and customers.”

EDITOR’S NOTE:Stay tuned later this week for additional reporting from the Bumper to Bumper/Crow Burlingame business conference and centennial celebration, which took place this past weekend in Little Rock.

Advertisement
In this article:Bumper to Bumper, Crow Burlingame
Print
Up Next:

Ford Puts New Leaders In Place As It Speeds Transformation