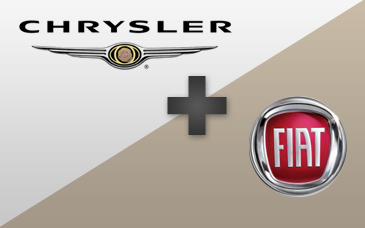 "The Fiat alliance enhances our viability plan, and we’re pleased with the progress of our discussions with Fiat. Meetings with all key constituents regarding concessions are collaborative and productive. These initiatives are totally aligned with our viability plan requirements, and will make Chrysler stronger and more competitive," said Robert Nardelli, chairman and CEO of Chrysler.

According to Chrysler, the potential alliance will help the automaker preserve jobs and strengthen its viability plan. The alliance would give Chrysler immediate access to substantially all Fiat group vehicle platforms, which would complement Chrysler’s current product lineup with fuel-efficient, environmentally friendly small cars and powertrain technology, saving Chrysler years of development time and billions in costs. Using Fiat’s distribution system, Chrysler would be able to greatly increase the global reach for the Chrysler, Dodge and Jeep brands in markets outside of North America, thereby creating incremental production volume to help fill idle capacity at existing Chrysler manufacturing plants.

Potential benefits of global partnerships and alliances were referenced in Bob Nardelli’s oral and written testimonies before the U.S. House and Senate, and reinforced in public statements over the last several months. The company said this alliance is completely in line with U.S. Treasury’s request for significant restructuring actions, concessions from constituents including employees, the UAW, dealers, suppliers, lenders and Chrysler Financial, development of fuel-efficient vehicles, and long-term overall viability. This alliance is also conditioned on the U.S. government approval of Chrysler’s upcoming viability plan submissions.

Chrysler had previously engaged in discussions that pursued a consolidation partnership with General Motors. After a series of exchanges, GM stated that the option of a consolidation was "off the table."

As part of Chrysler’s viability plan submitted to Congress, the company requested a $7 billion bridge loan. After extensive review, U.S. Treasury awarded the company $4 billion of the $7 billion, with $3 billion to be distributed pending the interim review of Chrysler’s viability plan on Feb. 17, and final review on March 31. No U.S. taxpayer funds would go to Fiat, said Chrysler.

Chrysler is working to meet all guidelines as defined by the terms of the loan from the U.S. Treasury and will present its viability plan on Feb. 17.