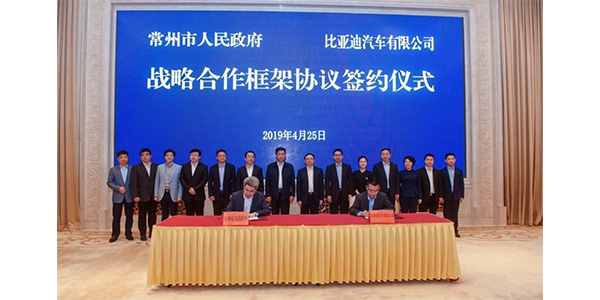 According to BYD, this move will help the automaker meet increasing demand from the EV market and expand its production capacity of pure electric passenger vehicles.

According to BYD, this move will help the automaker meet increasing demand from the EV market and expand its production capacity of pure electric passenger vehicles. With an expected investment of 10 billion yuan, BYD’s new manufacturing facility in eastern China is on track to become capable of churning out 400,000 complete vehicles and delivering a production value of over 50 billion yuan (about $7.4 billion US) annually once completed.

The new facility will manufacture BYD’s Dynasty series and “e” product series (pure electric vehicles ranging from A00-class to C-class, spread across 10 models). The models feature an energy consumption of 17.3-17.9 KWh per kilometer and a driving range of 450-600 kilometers (280-373 miles). The Chinese carmaker also plans to eventually set up a research and development center in Changzhou.

Wang Quan, secretary of Changzhou Municipal Committee of CPC, said during his meeting with Wang Chuanfu, founder and chairman of BYD, that establishment of the new facility is in line with the ongoing trends of the EV sector, as well as with BYD’s growth strategy and Changzhou’s planning for its next stage of development. The win-win collaboration between BYD and the city of Changzhou brings together the carmaker’s strengths in branding, technologies and market presence with Changzhou’s advantages in industrial development, talent and strategic location, creating a synergy that is expected to bode well for the development of China’s EV sector in terms of technological innovation and industrial competitiveness as well as the country’s roadmap toward becoming a leading provider of medium and high-end renewable energy products worldwide.

AutopromotecEDU Schedule Now Available For 2019 Event In May