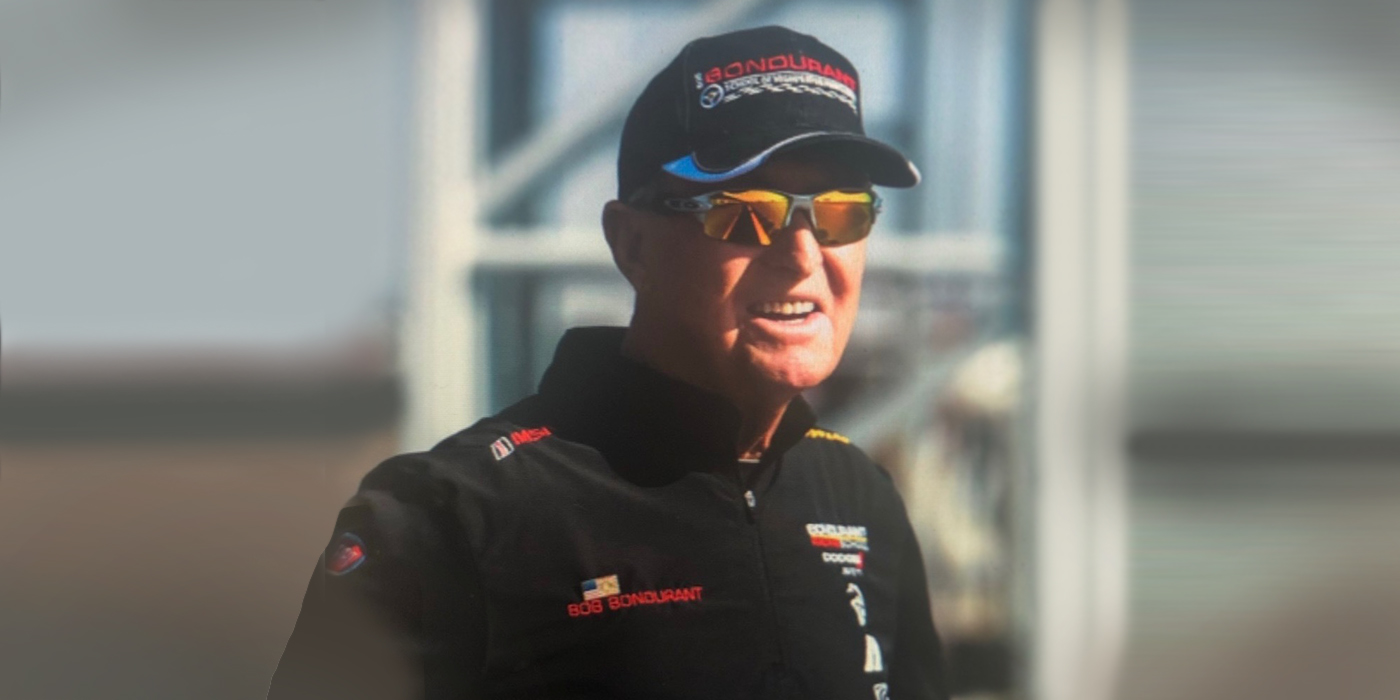 Bob Bondurant passed away at the age of 88.

Friday, November 12, 2021, the world lost an iconic American racing hero, Bob Bondurant. Bondurant passed away at the age of 88 and is survived by his wife, Pat, President and CEO of the Bondurant Racing School, who vows to continue the legacy of Bob’s School.

Bob began his fascination with speed as a three-year-old on his first tricycle with playing cards clothes pinned on his spokes for the sound of the rush. At age 8, his father introduced him to racing by taking him to Thursday night midget races.

By 12 years old, his parents were divorced, and he persuaded his mother to purchase a Whizzer electric bike to deliver his newspapers faster. By 14, he owned his first Indian motorcycle, and after the devastating death of his mother at 16 years old, he started racing flat track and even bigger Indians and Harleys. His mother’s death left him inconsolable, which is where the seed of his fearlessness was realized.

Bob was then inducted as the youngest member of the “Galloping Gooses,” which eventually became “Hell’s Angels.” At 23 years old, he discovered that he had more control with four wheels than he did with two, and his racing career began in a Morgan Plus 4.

From the age of 23 to 34, Bob became one of the most iconic race car drivers in the world. He had won the National Corvette Title, Le Mans GT, the World Championship, and the Baja 500… Between 1961 and 1963, he won 30 out of 32 races in Corvettes. Bob is the first and only American to bring the World SportsCar Championship trophy home to America in the legendary Shelby Daytona Coupe #26. He then rose to the highest level in racing with Ferrari in Formula 1 and prototypes.

Bondurant left the Formula 1 race series to race the even faster Can-Am cars with best friend and team driver, Peter Revson, in the Lola T70 Mark II. In 1967, a fateful race at Watkins Glen changed his entire career, and the Bondurant School was born. His steering arm broke at 150mph, and, lying in traction at the hospital, he vividly remembers his conversation with God explaining to Bob that he was needed more on Earth and to start a driving and safety school to save thousands of lives of those otherwise dying on the highways and in motorsports.

Answering the call, on February 14, 1968, Bob founded The Bob Bondurant School of High Performance Driving. For 50 years, it earned and held a reputation as the number-one racing school in the world, crediting Bob as “the global expert authority on driver training and safety.” Using his notorious racing skills, he copyrighted “The Bondurant Method.” Personally, he taught his hand-selected instructors how to educate the world to be better drivers.

Bob and the Bondurant team graduated well over 500,000 students at his famous school, including Christian Bale, Paul Newman, Clint Eastwood, Nicolas Cage, and Tom Cruise, to name a few. Bondurant was actively at the track every day, enthusiastically greeting his new students until he was well over 85 years old. He kept racing, too. Bondurant’s last Championship was 1997 for the World Cup Challenge, racing for Steve Saleen. Bondurant retired from racing at 79 after winning his last race at Pomona Raceway in his #72 ERA GT40.

Bob Bondurant has had a worldwide impact on the motorsports industry, and his legacy will live on eternally as the Bondurant Racing School moves forward into the future.

His wife Pat is the president and CEO of the Bob Bondurant School of High Performance Driving dba/ BONDURANT RACING SCHOOL and is carrying his legacy forward into the future.

Bondurant concludes, “My life has been lived in two halves. The first was becoming a World Champion driver. The second was teaching the world to become champions.”

In lieu of flowers the family requests donations be made to Team USA Scholarships at [email protected].