The honor was announced during The Parts Authority’s annual meeting and expo once again held at Citi Field in New York, home of the New York Mets.

NEW YORK – Centric Parts has been named 2013 Outstanding Business Partner by The Parts Authority – which is celebrating 40 years in business this year. The honor was announced during The Parts Authority’s annual meeting and expo once again held at Citi Field in New York, home of the New York Mets. 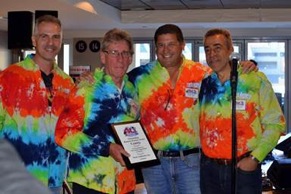 “It’s an honor to be recognized again for sticking to the Centric Parts philosophy of right part, right place, right time," said Dan Lelchuk, president of Centric Parts. "The Parts Authority has been a valuable partner and continues to be one of the leading names in the automotive aftermarket business. We congratulate them on 40 years and look forward to continued mutual success."

Founded in 1973 as Clearway Automotive, The Parts Authority today offers hundreds of thousands of different parts, in more than 250,000 square feet of warehouse space, available at 15 locations around New York. Celebrating its 40th anniversary in 2013, The Parts Authority annual meeting and expo this year attracted more than 5,500 attendees to Citi Field in New York.