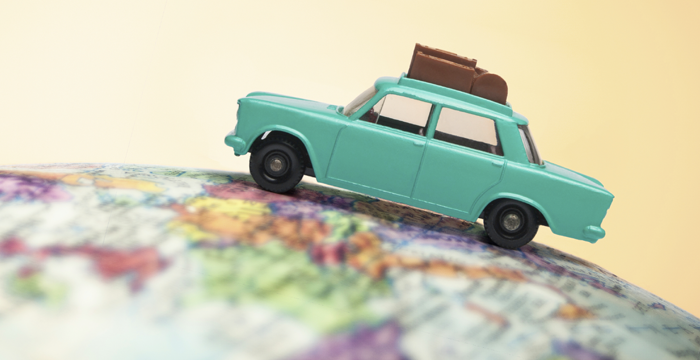 Overall, the outlook for the global automotive industry has improved. ­Growth rates are predicted to increase from 2.2 percent to 4.7 percent over the next five years. However, net declines in value are still forecast until 2016, followed by a pick-up to 2019. 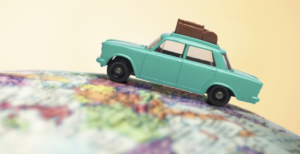 Emerging nations are clambering up the ladder of the world’s leading automotive traders, according to the latest Castrol Automotive Trade Barometer.

Overall, the outlook for the global automotive industry has improved. ­Growth rates are predicted to increase from 2.2 percent to 4.7 percent over the next five years. However, net declines in value are still forecast until 2016, followed by a pick-up to 2019.

For China, Mexico and a number of other emerging nations, growth rates will largely outstrip those of the established order of top automotive traders.

Mandhir Singh, chief operating officer at Castrol, said, “Our Automotive Trade Barometer suggests the sector will not return to business as usual before 2019. Instead, it will change shape, as consumer demand in different territories continues to affect auto production.”

As a global lubricant supplier, Castrol enables goods to be mined, made and moved around the world. The Castrol Global Trade Barometer (CGTB) is a series of reports tracking the performance and outlook of global trade based on a rolling, five-year forecast of future trade patterns (incorporating a Trade Barometer and Trade Outlook Index). The company says it gives the big picture view of world exports and imports helping senior business decision-makers to understand the drivers of global trade and growth opportunities across five sectors. The Automotive Trade Barometer tracks the value of automotive production in the world’s top 50 trading nations.

The latest barometer highlights significant change among the top flight of automotive traders (Table 1). Though Germany, the United States and Japan hold on to the top three spots, the rest of the top 10 look very different.

China continues to cement its position as a leading global player, rising from fifth to fourth place, while Mexico jumps three places to sixth.

Besides Germany, all European nations have either slipped down or out of the top 10. Spain is no longer at the top, while France, the U.K. and Italy have all lost ground.

Singh commented on the change, saying, “Mexico has made the most of its pivotal position supplying the U.S. and emerging Latin American markets, while China’s growth is due to its growing economy and middle class.

“Outside of the top 10, a number of emerging countries are rapidly climbing the automotive manufacturing trade ladder. They may start to challenge the European players.” 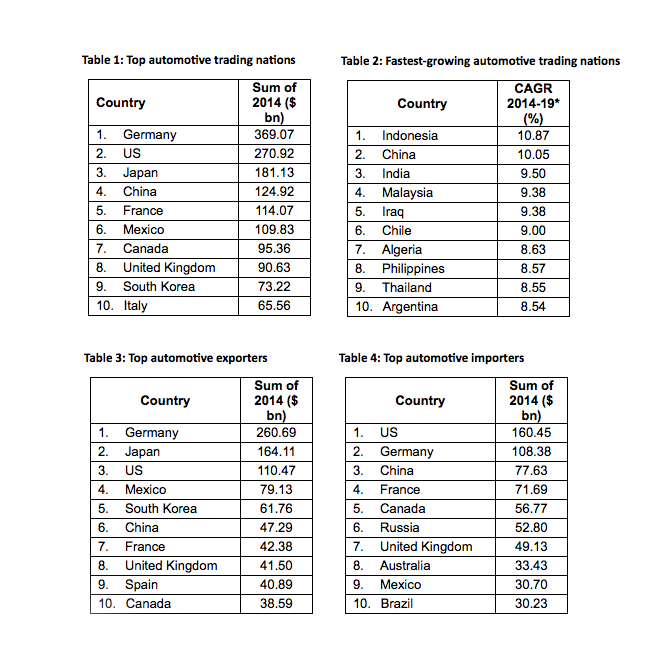 In the fast lane

China is now challenging Japan to become the world’s third-largest automotive trader, with forecast annualized growth of 10.05 percent to 2019. ­Only Indonesia can boast a faster rate of growth (Table 2).

South Korea has taken advantage of its proximity to China to develop strong trade links with the sector’s newest powerhouse. As a result, it is among the top 10 automotive traders for the first time, in ninth place (Table 1), and the fifth largest exporter (Table 3).

The rise of Mexico as a leading automotive trader is down to its strategic position within the Latin American regional supply chain. Having free-trade agreements with 44 countries, Mexico is a crucial export base for automakers from Europe, China, Japan and the United States. And Mexico’s boom in manufacturing has been aided by its proximity to the United States, low production costs and skilled workforce. It is now the world’s fourth-biggest automotive exporter (Table 3).

Singh commented, “By supplying established economies, emerging nations are tapping into regional supply chains, and raising their own status as automotive manufacturing hubs.”