North America will become the lead market for Brembo by the end of 2014.

PLYMOUTH, Mich. – Brembo celebrated the grand opening of its expanded North American manufacturing operations in Homer, Mich., yesterday. The investment, which will total more than $115 million dollars through the end of 2015, expands the facility where Brembo produces brakes, discs, calipers and corner modules. 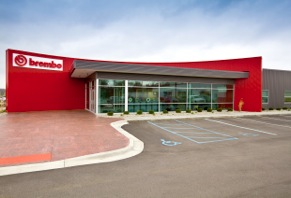 "This expanded and modernized production facility represents a new foundation for Brembo in North America, enabling us to increase our presence in the U.S. market and offer better service to our clients," said Brembo S.p.A Chairman Alberto Bombassei.

"Today’s celebration renews our commitment to the North American market," added Daniel Sandberg, president and CEO of Brembo North America. "The investment in the Homer facility will allow us to expand our product offerings not only in North America, but also for customers across the globe."

Brembo bought the Hayes-Lemmerz brakes discs division in 2007. That acquisition included the Homer, Mich., plant, where Brembo began manufacturing discs in the U.S. The plant underwent one expansion in 2008 and another two-phase expansion in 2012 and 2013. Brembo also built a caliper and corner module manufacturing facility adjacent to the disc plant in 2010. The total manufacturing space is now approximately 440,000 square feet, employing more than 450 people. There are 47 processing lines and 12 painting lines. In 2013, the facility produced 10 million discs and 300,000 calipers and corner modules and is expected to produce 12.5 million discs and 400,000 calipers and modules in 2014.