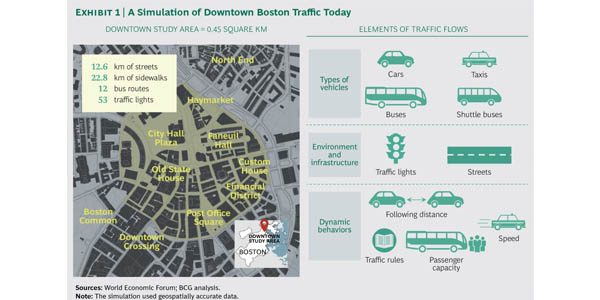 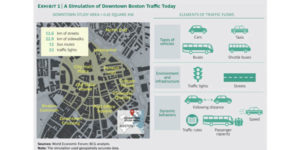 Boston is one of a handful of U.S. cities leading the charge to test self-driving cars. Launched last fall, the city’s Autonomous Vehicle (AV) Initiative has already yielded five important lessons for government leaders and policymakers, according to a new report from The Boston Consulting Group (BCG). Together with the World Economic Forum, it has been partnering with the city to roll out the initiative and assess its results.

The report, Making Autonomous Vehicles a Reality: Lessons from Boston and Beyond, is BCG’s latest on autonomous driving and the fourth issued with the Forum as part of the two organizations’ multiyear joint project on shaping the future of urban mobility with AVs. The report describes the opportunities and challenges that have surfaced in the first six months of Boston’s field-testing experience and offers initial recommendations for other cities and public-sector entities.

Boston’s multiphase testing program began in January with Cambridge-based AV software maker NuTonomy conducting trials of autonomous cars on public roads within Raymond L. Flynn Marine Park in the Seaport District. After the vehicles clocked more than 200 miles at different times of day and in different weather conditions, the program was expanded in June to include testing with Optimus Ride (like NuTonomy, an MIT spinoff) and Delphi Automotive, a tier 1 automotive supplier, throughout the district.

“Boston is a great example of the type of multi-stakeholder cooperation required to successfully develop new mobility business models – models that can help cities solve their most pressing transportation challenges and improve livability for their residents,” said Nikolaus Lang, a senior partner at BCG and coauthor of the report. “The speed with which the city has moved from initial announcement to piloting has been impressive.”

As summarized in the report, Boston’s initiative reveals five key lessons that policymakers, planners, and other private- and public-sector stakeholders involved in shaping the future of urban mobility should keep in mind:

Could AVs Be a Victim of Their Own Success?

As the report notes, autonomous cars (particularly electrically powered ones), in tandem with sharing models, promise enormous benefits to urban communities and to society in general. These benefits include greater safety, lower emissions, reduced congestion, more available parking space, greater access for nondrivers, more reliable and less stressful transportation, cost efficiency and greater productivity. “But achieving them requires the right mix of ambitious planning, regulation, testing and careful execution,” said John Moavenzadeh, head of the Mobility Industries and System Initiative at the World Economic Forum. “All key stakeholders must be involved – to ensure the greatest benefit to the most people, while minimizing unintended consequences.”

Indeed, the Boston initiative – which involved extensive scenario modeling and simulations as well as field testing – not only highlighted the potential benefits of AVs but revealed a few potential issues that stakeholders should watch out for. In short, AVs run the risk becoming victims of their own success. By making mobility cheaper and more convenient, they could increase the demand for transportation. If people were to use AVs more often and in an ad hoc manner – to run simple errands, such as picking up the dry-cleaning, for example – the result could be more, not less traffic congestion. Greater congestion also could result from a rise in certain types of zero-occupancy trips, such as when AVs cruise the streets to save on parking costs.

Another potentially undesirable outcome: AVs could contribute to urban sprawl if commuters conclude that they can live farther out of town because commuting to work has become faster, less stressful and more comfortable.

“All of these possibilities underscore the need for public-sector managers and leaders at the city, county and state levels to participate in formulating a transportation strategy that includes autonomous transportation modes, yields the greatest benefits to the largest number of stakeholders, and minimizes unintended consequences,” said Michael Rüssman, another BCG senior partner and report co-author.

For more information about the report, a copy can be downloaded at on.bcg.com/2yf5DmQ.

Videos on BCG’s and the Forum’s collaboration with the City of Boston can be viewed at on.bcg.com/AutomotiveInsights.

Advertisement
In this article:Boston, Lessons, report, Self-Driving Cars
Print
Up Next:

New Technology Opens Up $1.5B Market For Aftermarket Industry

US Gasoline Demand More than 'Halfway' Back

Coronavirus And Stimulus Drive Up eCommerce Sales
Connect with us