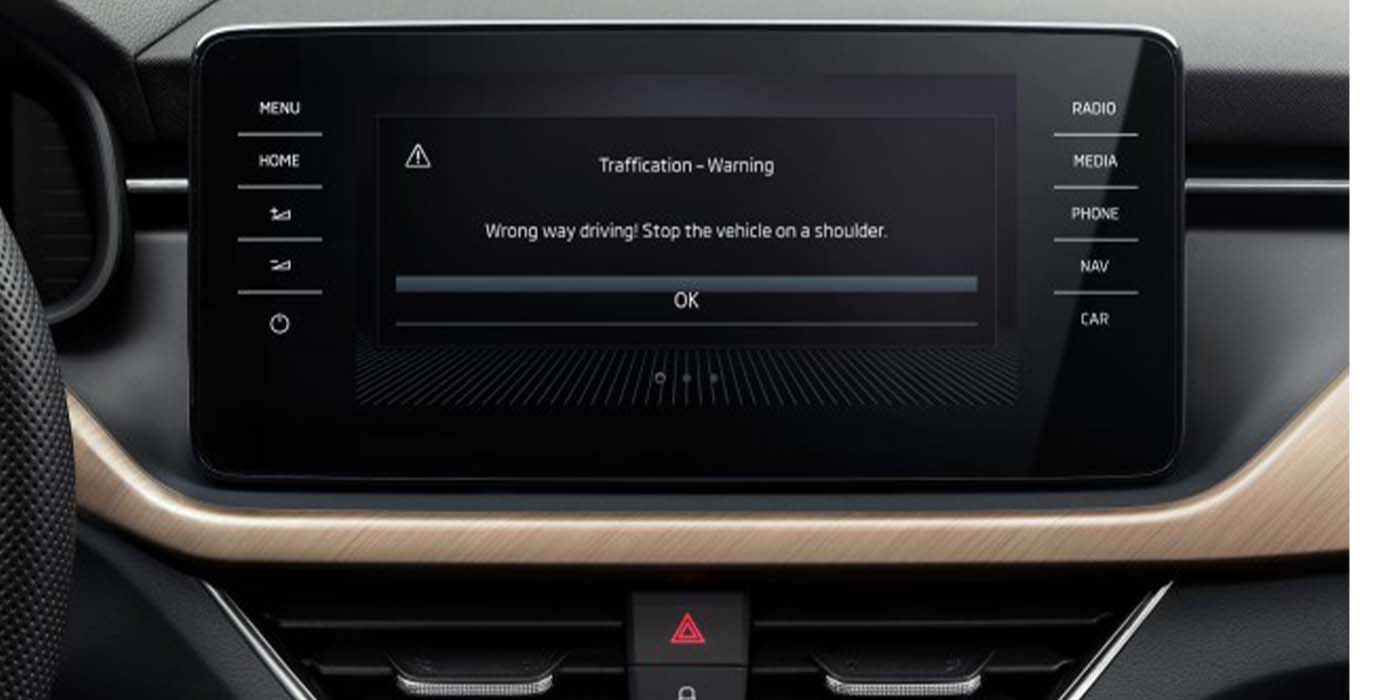 Lifesaving warning: Bosch solution sends alert to drivers in the vicinity and the wrong-way driver themselves.

“Warning! A wrong-way driver is headed your way!” Traffic reports about wrong-way drivers are an all-too-familiar occurrence. On German radio stations alone, some 2,000 such warnings are broadcast each year. And much too often, these incidents lead to critical situations – including serious and even fatal accidents. With its cloud-based wrong-way driver warning system, Bosch has developed a solution that warns both the wrong-way driver and all road users at risk of the impending danger within seconds – much faster than traffic news on the radio.

Now, ŠKODA is the world’s first automaker to opt for the Bosch wrong-way driver warning system. Thanks to a new infotainment app, ŠKODA drivers will receive the lifesaving warning directly via the display in their vehicle’s cockpit.

“Our goal is to put the wrong-way driver warning system in every car – in line with our ‘Invented for life’ ethos. Every death, every injury caused by wrong-way drivers is one too many,” said Dr. Mathias Pillin, president of Bosch’s new Cross-Domain Computing Solutions division. Starting in the first quarter of 2021, ŠKODA will offer the wrong-way driver warning system in numerous models, such as the ŠKODA SUPERB, SCALA, KAMIQ, KAROQ and KODIAQ, equipped with top infotainment systems. Other vehicle models are scheduled to follow before the year is out.

“Increasing safety on the road is an important goal for ŠKODA. Our new app called Traffication with wrong-way driver warning brings us a step closer to achieving it,” said Michal Vondra, product manager for the Traffication app at ŠKODA.

Accidents caused by wrong-way drivers are fortunately rare, but when they do happen, they usually have serious consequences. In most cases, however, the warning of the unforeseeable danger comes too late: one-third of such incidents generally end after just 500 meters – in the worst case, with fatalities. With Bosch’s cloud-based warning system installed directly in the head unit of ŠKODA vehicles, the two companies now want to further reduce the number of accidents caused by wrong-way drivers.

As a vehicle approaches a freeway entrance or exit, the system automatically sends its current anonymized GPS position to the cloud. In the Bosch cloud backend, the software then compares the vehicle’s current direction with the permitted direction of travel. If these two pieces of information clash, the system will alert the wrong-way driver to their mistake by flashing a warning on the display. The distinctive feature of this solution is that the warning occurs within just a few seconds. In the vast majority of cases, this is before the driver even gets on the freeway. In addition, Bosch and Škoda are planning that the app will also immediately warn all oncoming road users who are connected and potentially at risk. This feature should be available later this year. “The more vehicles connected to the Bosch wrong-way driver warning app, the closer-knit the invisible safety net will be,” Pillin says. Once the vehicle leaves the entrance or exit area of the freeway, the data exchange between the vehicle and the cloud is terminated. Besides equipping ŠKODA vehicles with the wrong-way driver warning system, Bosch is in talks with other automakers to make it a feature in more and more vehicles.

Bosch’s cloud-based wrong-way driver warning system has been available as a smartphone app since 2018 and is now offered by 25 app partners in Europe. This makes it available to a total of 26 million users. To deploy the system, a software module is integrated into the smartphone apps of radio stations and of streaming, navigation, and news providers. In this case, the anonymized GPS data is sent to the cloud via smartphone and analyzed in the Bosch backend. The warning is given via the smartphone display and an acoustic signal. Around 2.5 million unique active users per month already employ Bosch’s wrong-way driver warning system in Europe, including people in Spain, France, Sweden, Norway, Poland, Italy, and the United Kingdom. Additional users are to join this year as the system expands to the U.S. and Canada – moving beyond Europe for the first time. Bosch’s cloud backend currently evaluates more than 4.5 million journeys for the risk of wrong-way drivers – every single day.

Advertisement
In this article:apps, Driver Safety, infotainment, SKODA
Print
Up Next:

Kia Transformation To Focus On EVs And Mobility

JLM Lubricants Adds to Transmission Products Line
Connect with us