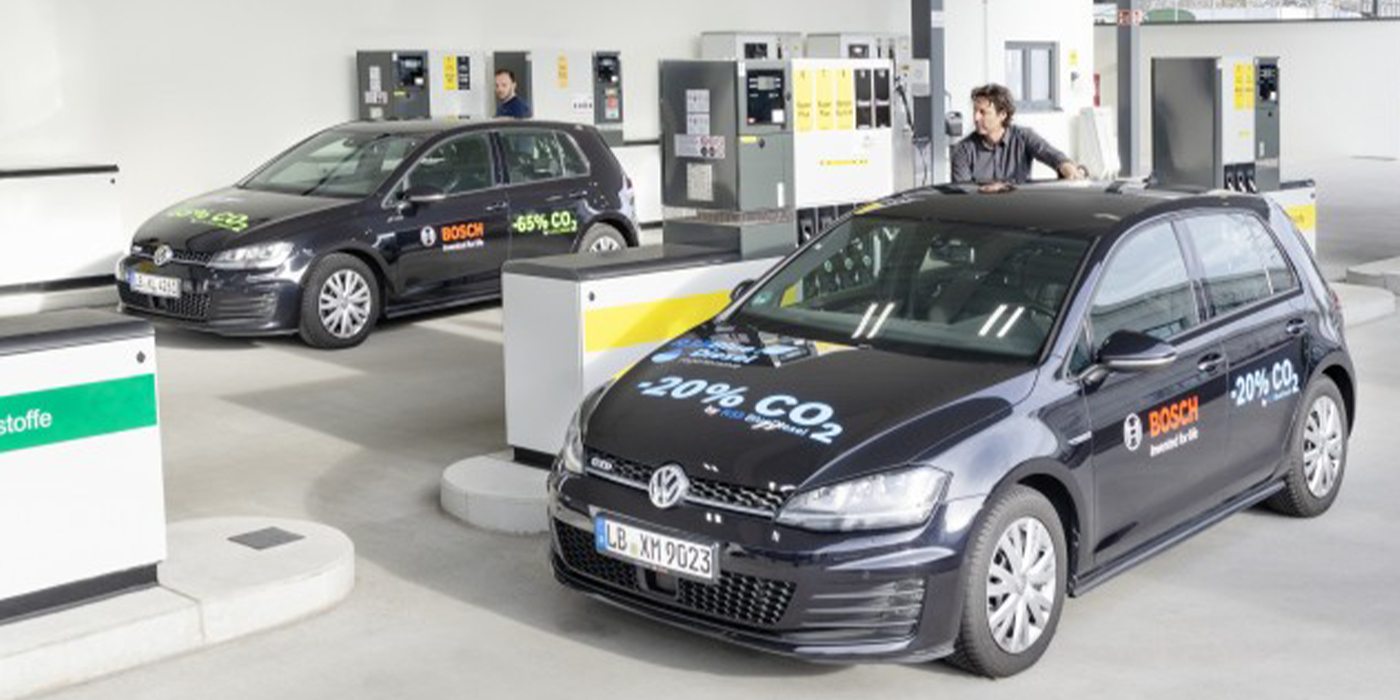 Sale of Blue Gasoline also planned at regular filling stations in the course of the year.

The available range of renewable low-carbon fuels is growing. Following on from R33 Blue Diesel, Bosch, Shell and Volkswagen have now come up with a low-carbon gasoline. Their new fuel, called Blue Gasoline, similarly contains up to 33 percent renewables, ensuring a well-to-wheel reduction in carbon emissions of at least 20 percent per kilometer driven. This means a fleet of 1,000 VW Golf VIII 1.5 TSIs alone could save more than 230 metric tons of CO₂ per year, assuming an annual mileage of 10,000 kilometers each. Shell will offset the remaining carbon emissions from the use of Blue Gasoline through certified offset arrangements. The initial plan is to make the fuel available at regular filling stations over the course of the year, starting in Germany. The aim is for the price at the pump to be in the range of premium fuels such as Shell V-Power.

“On the road to climate-friendly mobility, we must ensure we don’t leave any technical opportunities untapped, starting with electromobility and ending with renewable fuels. Every bit of CO₂ we save can help us achieve our climate targets,” says Dr. Uwe Gackstatter, president of the Bosch Powertrain Solutions division. “We’re pleased to present this counterpart to R33 Blue Diesel. Our new fuel now also takes gasoline engines a big step forward in terms of sustainability,” says Felix Balthasar, Manager Specialty Fuels at Shell.

Sebastian Willmann, head of Internal Combustion Engine Development at Volkswagen, adds, “Blue Gasoline is another building block in the effective reduction of CO₂ emissions from the vehicle fleet. Blue Gasoline’s high storage stability makes the fuel particularly suitable for use in plug-in hybrid vehicles. In the future, the expansion of the charging infrastructure and larger batteries will mean that these vehicles predominantly run on electrical power, and thus that fuel may remain in the fuel tank for longer periods of time.”

Blue Gasoline fuel complies with the EN 228/E10 standard and even exceeds it in key parameters such as storage stability and boiling behavior. High-quality additives also keep the engine extremely clean and protect it against corrosion. This means not only that the fuel can be distributed via the existing filling station network, but also that it can be used in all new and existing vehicles for which Super 95 E10 gasoline has been approved. The proportion of up to 33 percent renewables is made up of biomass-based naphtha or ethanol certified by the International Sustainability and Carbon Certification (ISCC) system. One source of such naphtha is what is known as tall oil, a by-product in the production of pulp for paper. But naphtha can also be obtained from other residual and waste materials.

In the Blue Gasoline project, the three partners jointly defined the fuel specification to be achieved, taking into account engine requirements and sustainability. They put the product they developed through intensive testing on engine test benches and in trial vehicles – with consistently positive results. Bosch will debut Blue Gasoline at its company filling stations as early as May 2021, starting with its Schwieberdingen site, with a rollout to the company’s filling stations at its Feuerbach and Hildesheim sites scheduled for the course of 2021. The supply of conventional Super 95 E10 gasoline will then be gradually phased out. Since the end of 2018, R33 Blue Diesel has been the only diesel fuel that Bosch company filling stations offer for company cars and internal delivery vehicles. R33 Blue Diesel is also becoming available at more and more regular filling stations in Germany. At present, it is offered at eight filling stations belonging to different brands nationwide, with more set to follow.

Renewable fuels are not a substitute for electromobility

For Bosch, renewable low-carbon and carbon-neutral fuels will not replace electromobility, but complement it. In principle, the use of these fuels makes sense in all modes of transport, but especially in those for which there is as yet no clear and economical path to electrification. In addition to ships and aircraft, this applies primarily to heavy goods vehicles and existing vehicles, but also to all the vehicles with internal-combustion engines or hybrid powertrains that are on the world’s roads today or will be built in the coming decades. To promote rapid market uptake for these fuels, the focus is on renewable biomass and synthetic fuel components that can be blended into regular fuel in high proportions in line with existing fuel standards. By using Blue Diesel and Blue Gasoline, Bosch is demonstrating that it is not just up to new vehicles to reduce the transport sector’s CO₂ emissions: the existing fleet can also help achieve climate targets.

Advertisement
In this article:Bosch, renewable gasoline, Shell, Volkswagen
Print
Up Next: