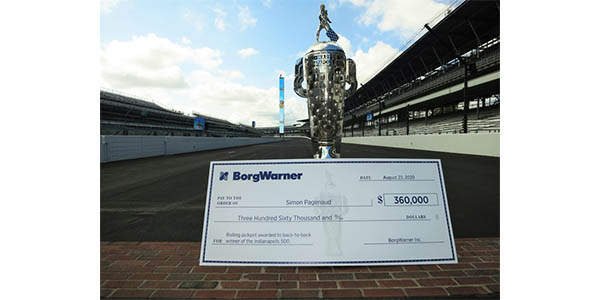 Reigning champion Simon Pagenaud will have the chance to claim the $360,000 jackpot.

BorgWarner is, once again, adding excitement to Victory Circle with its rolling jackpot, now totaling $360,000. Each year, the company sweetens the pot by adding $20,000, with the lump sum being up for grabs by the next driver who achieves back-to-back Indianapolis 500 wins. Established by BorgWarner in 1995 as a way to amplify its involvement with the classic event, the prize money has only been claimed once – by Helio Castroneves in 2002 for his back-to-back victories.

“BorgWarner has a long history with this prestigious motorsport event; from awarding the Borg-Warner Trophy to being the official turbocharger supplier of the race, the Indianapolis 500 is deep-seated within our company,” said Frédéric Lissalde, president and CEO, BorgWarner Inc. “The rolling jackpot that BorgWarner increases each year adds even more excitement to this legendary race.”

The 2020 race is scheduled to be held on Sunday, Aug. 23, at the Indianapolis Motor Speedway where the reigning champion, Simon Pagenaud, will have the chance to claim the jackpot. If Pagenaud does not end up in Victory Circle, the $360,000 will carry over to the 2021 race with an additional $20,000 added by BorgWarner. If Pagenaud is the victor, the rolling jackpot will start over at $20,000 next year.

Beyond the potential of winning $360,000, this year’s winner will have their likeness permanently affixed to The Borg-Warner Trophy, which is currently adorned with the faces of the previous Indy 500 winners. Additionally, at a later date, the winner will be presented with a miniature version of the coveted Borg-Warner Trophy, known as the BorgWarner Championship Driver’s Trophy or “Baby Borg” to keep for themselves.

Advertisement
In this article:borgwarner, indianapolis 500
Print
Up Next:

Speakers List Announced For YANG's Virtual Experience
Connect with us