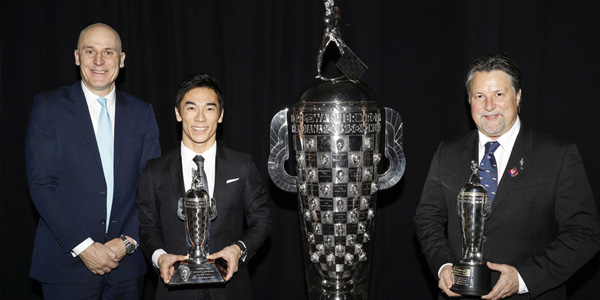 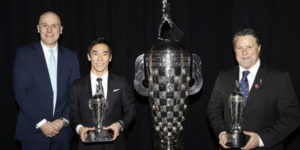 At the Automotive News World Congress in Detroit, BorgWarner President and CEO James Verrier presented Takuma Sato with his first BorgWarner Championship Driver’s Trophy, known as the “Baby Borg,” commemorating Sato’s 2017 Indianapolis 500 victory. Sato is the first Japanese driver to win the Indianapolis 500 and receive a Baby Borg, which features a duplicate of his sterling silver image that was unveiled on the iconic Borg-Warner Trophy in October. Andretti Autosport owner Michael Andretti, who has won three of the last four Indianapolis 500 races, was presented with his fifth BorgWarner Championship Team Owner’s Trophy.

“Takuma’s win marks not only an exciting moment in the history of the Indianapolis 500 but also the Borg-Warner Trophy’s history. For the first time, the trophy ventured outside the United States to Japan to celebrate Sato, Honda and the Japanese fans,” said Verrier. “On behalf of everyone at BorgWarner, we are proud to present Takuma Sato with the 2017 Baby Borg as he truly carries on the Borg-Warner Trophy’s tradition of performance and excellence.”

“I will cherish the Baby Borg as a memory of my Indianapolis 500 win for the rest of my life,” said Sato. “It is an honor to be the first Japanese recipient and to be represented on the Borg-Warner Trophy alongside so many other great drivers. I am looking forward to the 2018 Indy 500. It would be great to repeat my win and add my face again to the beautiful Borg-Warner Trophy.”

On the Borg-Warner Trophy’s celebration tour to Japan late last year, the trophy traveled with Sato to several events, including stops at BorgWarner’s plant in Nabari, Honda’s Thank You day and Sato’s fan day, before returning to the Indianapolis Motor Speedway Museum.

Advertisement
In this article:borgwarner, Indy 500
Print
Up Next: