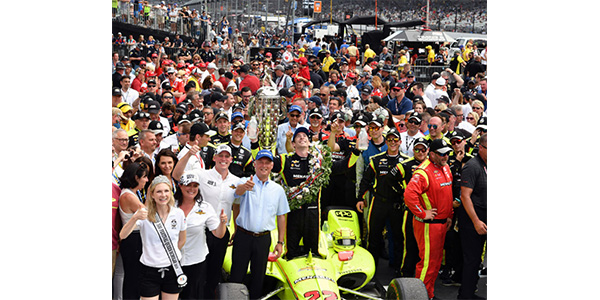 Pagenaud to join the exclusive club of Indianapolis 500 winners immortalized on the Borg-Warner Trophy.

The sterling silver Borg-Warner Trophy is one of the most recognized trophies in the world and is the symbol of open-wheel racing excellence. It was first presented to Louis Meyer at the 1936 Indianapolis 500. With this win, Pagenaud will be the 106th face added to the iconic trophy after going through a detailed and unique sculpting process.

“BorgWarner is honored to be a part of The Greatest Spectacle in Racing – the Indianapolis 500,” said Lissalde. “Winning the Indy 500 and being awarded the Borg-Warner Trophy is the ultimate culmination of hard work, dedication and passion – all traits that Simon Pagenaud and Team Penske exhibited today.”

BorgWarner’s involvement in the Indianapolis 500 races goes beyond the coveted trophy. The company’s Engineered for Racing (EFR) have been featured on every NTT IndyCar Series car since 2012. Assembled at BorgWarner’s Asheville, North Carolina, facility, the company’s lineup of EFR turbochargers deliver an unprecedented combination of advanced technologies. BorgWarner’s EFR turbochargers are available through authorized distributors so street and race car enthusiasts can leverage the same powerful performance as the professionals.

Advertisement
In this article:borgwarner, Indy
Print
Up Next: