AMSTERDAM – From June 16 to June 18, the Amsterdam RAI convention center was the focal point for the worldwide remanufacturing industry. 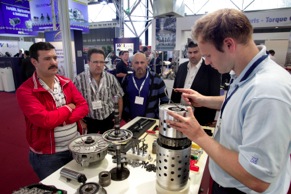 ReMaTec2013, the international trade fair for remanufacturing, was deemed a success by the exhibitors and visitors alike, event organizers say. The promise that remanufacturing holds for the future was underlined by a 25 percent growth in exhibitors and 30 percent growth in visitor attendance for this year’s two-day event. ReMaTec2013 was visited more than 3,551 times by professionals from 63 countries, while the 14 seminars in the ReMaTec Theatre brought in almost 500 visitors.

ReMaTec2013 drew an international audience of professionals from 63 countries to Amsterdam, with 64 percent of all visitors coming from outside the Netherlands. The event showed an increase of 25 percent of visitors in a director/owner capacity. Addressing global topics like growth potential for remanufactured parts and new transmission technologies and their potential impact on remanufacturing, the ReMaTec Theatre hosted discussions on some of the sector’s most critical issues.

Visitor attendance of 3,551 – an increase of 30 percent – made for the best ReMaTec to date, trade show organizers reported. Niels Klarenbeek, domain manager of the show, says he was delighted with the positive feedback from attendees.

"ReMaTec represents the current industry as no other event and constitutes an ideal platform to bring the industry, education and research together," said Klarenbeek. "All feedback during and after the show has been overwhelmingly positive, and the atmosphere on the floor was simply buzzing."

Vehicle manufacturers including BMW, Daimler AG, Ford, GM, Hyundai, Jaguar Land Rover, JCB, John Deere, Komatsu, MAN Truck & Bus, Opel, PACCAR, PSA Peugeot Citroën, Scania, Toyota, Volvo Cars, Volvo Construction Equipment and Volvo Trucks were represented by their aftermarket executives. Alongside the many innovations on display, the event welcomed some 70 new companies presenting themselves to the market, with 55 percent of the visitors attending ReMaTec for the first time. Doubling up the number of workshops and seminars in the show floor theatre brought an important focus for this edition: education. A lineup of authoritative speakers covering all the major topics consistently drew large groups of interested delegates to all sessions.

Shell Lubricants Named A Supplier Of The Year By Chrysler Group

Events: The Group To Hold Expo For Banner Shops