Behr and joint venture Behr Hella Service hosted an event for automotive editors Oct. 13, during which guests were invited into the company’s wind tunnel and to view some of the company’s product lines. 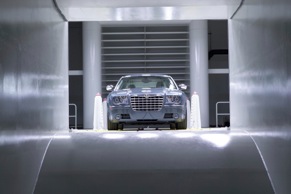 With nearly 45 percent humidity, that was the temperature inside the climatic wind tunnel at Behr’s North American headquarters. It’s where Behr brutalizes vehicles under simulated blaring sunlit conditions to see how well air conditioning systems will perform and how well HVAC systems will cooperate with engine cooling components. Every conceivable driving condition, from huge variances in temperature and humidity, solar radiation and loads on vehicles are tested. The company also can blast air through the tunnel at about 125 mph.

Behr and joint venture Behr Hella Service hosted an event for automotive editors Oct. 13, during which guests were invited into the company’s wind tunnel and to view some of the company’s product lines. Guests were invited into the tunnel only for so long due to the extreme temperature. Behr’s other wind tunnel resides in Stuttgart, Germany. The Troy tunnel features two pairs of rollers on which a vehicle’s wheels can sit during testing.

Behr is a leading OE supplier for thermal management, engine cooling and air conditioning components and systems, according to the company.

At the media event, Heinz Otto, president of Behr America; Torsten Waldheim, managing director of Behr America Service Parts; and Roland Grimm, head of product management for Behr Hella Service, gave an overview of the various companies and their directions for the future.

Behr Hella Service began in 2005 in Europe as a joint venture between Behr Service and Hella to comprise Behr’s independent automotive aftermarket business worldwide, according to the companies. In 2007, BHS NAFTA was formed and located in Peachtree City, Ga., and serves the U.S., Canadian and Mexican markets. The following year, the company expanded its reach beyond “European only” parts into Japanese and Korean applications.

In 2010, Behr sales were $4.37 billion worldwide, with 21 percent of that coming from North America, Otto said. Behr and Hella have other joint ventures including: Hella Behr Plastic Omnium (HBPO) GmbH, which designs, develops and produces automotive front-end modules for cars and trucks; and Behr-Hella Thermocontrol (BHTC) GmbH, which develops and manufactures climate controls.

Additions to the 2011 BHS Heavy-Duty program are detailed and listed in a Heavy Duty Range Supplement, which is available in a print version and online at www.hellausa.com.

Behr Puts Vehicles to the Test in Climatic Wind Tunnel