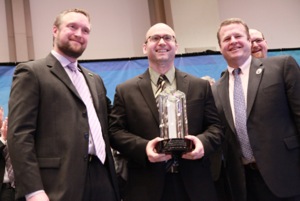 The Employee and Salesperson of the Year awards were presented March 27 at the BASF Automotive Refinish 2015 North America Team Meeting. 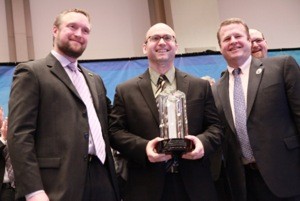 SOUTHFIELD, Mich. – The BASF Automotive Refinish Team recognized Gordon Erdelean as the 2014 Employee of the Year and Ray McCutcheon as the 2014 Salesperson of the Year.

The Employee and Salesperson of the Year awards were presented March 27 at the BASF Automotive Refinish 2015 North America Team Meeting.

This marks the first time BASF Automotive Refinish has named an Employee of the Year. Erdelean, a Limco market segment manager, was recognized for his customer focus, collaboration and communication.

“Gordon lives BASF’s strategy through his commitment to excellence and his willingness to go above and beyond to meet his customers’ needs,” said Paul Whittleston, vice president for Automotive Refinish Coatings in North America.

“Ray’s entrepreneurial drive, customer focus and collaboration for achievement with his distribution partners reflect the qualities that drove his success,” said Whittleston. “In order for our business to succeed we need to perform on the highest level in every function, not just sales. Both Gordon and Ray are the epitome of high performing employees.”

WIN To Hold ‘Get The 411’ Virtual Event
Connect with us