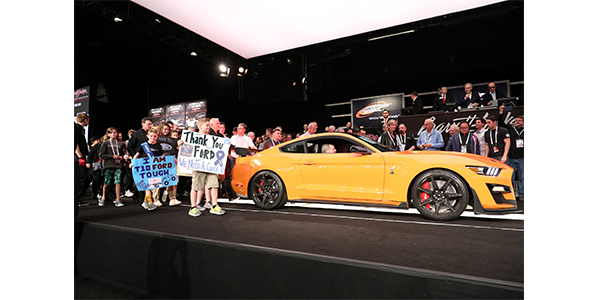 During the weeklong premier automotive lifestyle event, Barrett-Jackson raised $9.6 million, which includes donations made on the block beyond the hammer prices, and is the largest amount raised at one auction in the company’s 48-year history.

Barrett-Jackson was the epicenter for raising much-needed funds and awareness on behalf of deserving charities nationwide at its 48th Annual Scottsdale Auction, Jan. 12-20 at WestWorld of Scottsdale. During the weeklong premier automotive lifestyle event, Barrett-Jackson raised $9.6 million, which includes donations made on the block beyond the hammer prices, and is the largest amount raised at one auction in the company’s 48-year history. To date, Barrett-Jackson has raised more than $114 million for charity. The energy in the auction arena was tangible as celebrities – including Emmy and Golden Globe award-winner Gary Sinise, singer/songwriter Ray J, NASCAR legends, Medal of Honor recipient Dakota Meyer and top auto manufacturers – joined the Barrett-Jackson team to sell some of the most rare and desired cars.

“With the help of the generous car collector community, we raised $9.6 million for charity, the most of any auction in our 48-year history,” said Craig Jackson, chairman and CEO of Barrett-Jackson. “As a company that was built on giving back to the community, this is a significant milestone worth celebrating. We’re so grateful for the countless wonderful people and companies, from OEM partners to celebrities, who have joined us on this phenomenal journey. Giving back is the heartbeat of Barrett-Jackson and the collector car community.”

A total of 13 lots were generously donated to help raise funds and awareness for deserving charities across the country. The auction was adrenaline-filled as some of the greatest names in NASCAR were on the block in support of their favorite charities. Richard “The King” Petty, as well as former NASCAR Winston Cup Champion Rusty Wallace, Monster Energy NASCAR Cup Series driver David Ragan and NASCAR Hall of Famer Jeff Gordon each took to the auction block to encourage bidding during the sale of vehicles for their charities.

In keeping with tradition, Barrett-Jackson gave bidders the chance to own three very special VIN 001 vehicles. On Friday, Carolyn and Craig Jackson were the winning bidders of the 2020 Ford Mustang Shelby GT500 VIN 001 (Lot No. 3008), which sold for $1.1 million to benefit JDRF.

“I’m a lifelong Shelby enthusiast and enjoyed a long friendship with Carroll Shelby,” said Jackson. “Over the years I’ve collected several rare Shelby Mustangs, including the ‘Green Hornet,’ and more recently the experimental Shelby, ‘Little Red.’ The 2020 GT500 VIN 001 is a descendant of those vehicles, and I’m honored to have it as a part of my collection. More importantly, the money from the sale of this rare Mustang will be donated to JDRF. Type 1 diabetes is a terrible disease, and Carolyn and I are grateful to be a part of helping JDRF find a cure.”

The auction action continued on Saturday when Barrett-Jackson teamed up with Toyota North America for the sale of the 2020 Toyota Supra VIN 20201 (Lot No. 3010,) which raised $2.1 million to benefit the American Heart Association and The Bob Woodruff Foundation. The winning bidders of the first global production Supra were renowned collectors Jeanette and John Staluppi. The spirit of giving continued when the 2019 Ford GT Heritage Edition VIN 001 (Lot No 3012) sold for $2.5 million, with 100 percent of the hammer price benefiting United Way for Southeastern Michigan, which was purchased by Hendrick Motorsports owner Rick Hendrick.

“There are no words to express how blessed we feel to be able to support so many wonderful charity organizations,” said Steve Davis, president of Barrett-Jackson. “You simply can’t put a price tag on all of the good that will come from the millions raised to help our kids, members of our U.S. military and first responders live richer, fuller lives. There’s no doubting the generous spirit of this hobby when our consigners and bidders open their hearts to help where help is needed most.”

In total, 16 charity vehicles raised $9.6 million, which includes additional donations made on the block beyond the hammer prices.

Advertisement
In this article:Barrett-Jackson Auction
Print
Up Next: