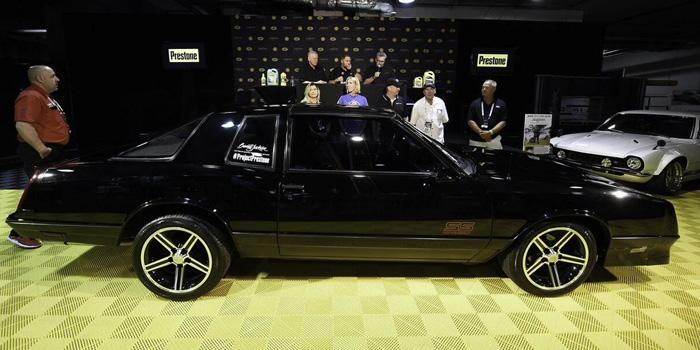 The project car, a 1987 Chevrolet Monte Carlo SS Aero Coupe, has a restoration plan to see the completed vehicle auctioned at Barrett-Jackson’s Scottsdale Auction in January 2018. 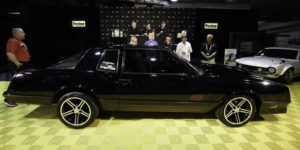 Barrett-Jackson and Prestone are teaming up this summer for a one-of-a-kind restoration build named “Project Prestone.” The project car, a 1987 Chevrolet Monte Carlo SS Aero Coupe, was unveiled at a press conference at Mohegan Sun in Connecticut, along with the restoration plan that will see the completed vehicle auctioned at Barrett-Jackson’s 2018 Scottsdale Auction in January 2018.

“Barrett-Jackson and Prestone are known for quality and innovation, and we are thrilled to partner together to give our fans an inside look at a professional restoration build,” said Craig Jackson, chairman and CEO of Barrett-Jackson. “I’ve been involved in countless restorations starting at a young age and can appreciate the tremendous amount of work that goes into this incredibly rewarding experience. This will be a fun project to follow to completion and we look forward to it crossing the block in Scottsdale.”

At the completion of Barrett-Jackson’s 2017 Northeast Auction this week, the vehicle will be transported to Scottsdale, Arizona, and set up within the Barrett-Jackson Collection Showroom, where a majority of the restoration build will take place. Over the summer months, the showroom division manager and team will complete a variety of work on the restoration build that includes replacing and upgrading the stock suspension, brakes and exhaust. The ’87 Monte Carlo SS Aero Coupe also will have a rebuilt transmission, new sound system and graphics package.

“We are thrilled to be partnering with Barrett-Jackson on this build,” said Randy Fisher, vice president of marketing at Prestone. “Given the caliber of both the Barrett-Jackson auctions and their in-house restoration team, we expect that this build will embody Prestone’s rich history and passion for cars, as well as our continued commitment to innovation and performance, which we’ve focused on for the past 90 years.”

Prestone and partners of the project are invited to the collection showroom to participate in the restoration build, and Barrett-Jackson will release photos and videos on Barrett-Jackson.com and social media using #ProjectPrestone to document the progress. The restoration build will be completed at the Las Vegas Auction on Oct. 19-21, and will be on display during the show. The vehicle also will be included at the Prestone trailer display at the SEMA Show from Oct.31-Nov. 3 in Las Vegas, along with various events in Arizona. Outside of its appearances, the Monte Carlo will be stored at the Barrett-Jackson Collection Showroom until it crosses the auction block at the 2018 Scottsdale Auction.

Barrett-Jackson’s 2017 Northeast Auction is underway at Mohegan Sun in Connecticut. Follow all the action online and tune in live on Velocity and Discovery Channel. Complete auction information, including television times and results,is available at Barrett-Jackson.com.

Advertisement
In this article:Barrett-Jackson, Prestone, Restoration
Print
Up Next: