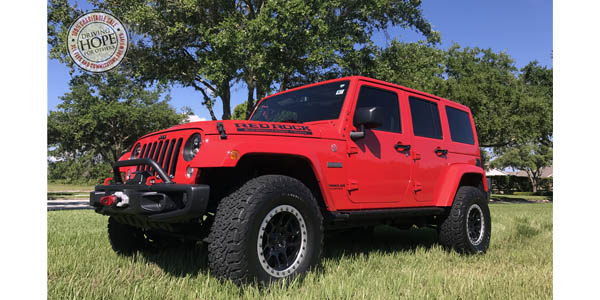 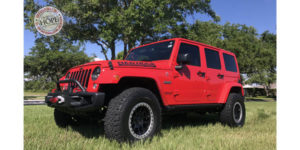 “Like Barrett-Jackson, our friends at NASCAR have strong ties to Las Vegas and were deeply saddened by the recent tragic event,” said Craig Jackson, chairman and CEO of Barrett-Jackson. “We’re so proud this longtime partner of ours is stepping up to help the medical personnel who are fighting daily to save the lives of those injured. It is just one of many initiatives to help to show our support for Las Vegas at this difficult time.”

The 2016 Jeep Wrangler Red Rock Edition (Lot #3000) is one of less than 50 production vehicles built by Jeep, and was inspired by Moab and the celebration of the 50th annual Easter Safari gathering of Jeep enthusiasts from all over the world. The vehicle was carefully delivered to Petty’s Garage and the engine was treated to a supercharger performance upgrade to enhance the power, under the supervision of seven-time NASCAR champion Richard Petty himself. When complete, “The King” put his famous artistic signature on the passenger side portion of the dash.

“It’s an honor to donate this vehicle to benefit the UNLV School of Medicine Dept. of Emergency Medicine Residency Program Fund,” said Helton. “We were reminded of the importance of emergency room personnel two weeks ago in Las Vegas. The work that was done under the most trying of circumstances was admirable ­ and invaluable. This is a cause the foundation is proud to support and we urge others to do so.”

Mike Helton and NASCAR Hall of Famer Rusty Wallace will be onstage as the rare Jeep crosses the block at 3:30 p.m. on Thursday, Oct. 19. The program fund the money will go to provides support for the UNLV School of Medicine to train physicians as emergency medicine specialists at UMC, Nevada’s only Level 1 Trauma Center. UMC played a critical role in the initial response to the tragic shooting in Las Vegas and continues to be an important site for the treatment of victims, many who are facing a lifelong battle to recover.

“We are proud to be a part of an incredible culture where many of our partners have stepped up over the years to donate spectacular charity vehicles, and this Jeep is another great example,” said Steve Davis, Barrett-Jackson president. “We are honored to provide the platform for moments such as this, which are all about us joining together as a community to support Las Vegas and the many families that need our help after such a tragic event.”

The 10th annual Barrett-Jackson Las Vegas Auction will be broadcast on Discovery and Velocity, and internationally on Velocity Canada, Discovery UK and Discovery Turbo UK during the three-day auction. For specific television schedules, click here.

Advertisement
In this article:auction, Barrett-Jackson, las vegas
Print
Up Next:

'Roadshow Roadmap' Features Tips for AAPEX Exhibitors
Connect with us