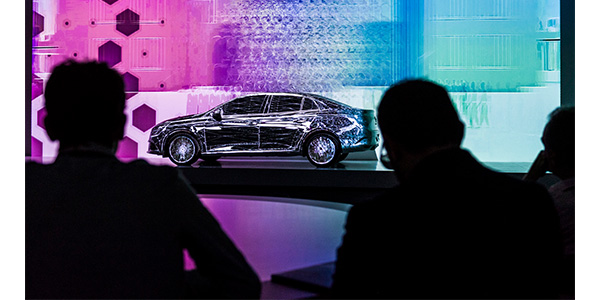 The evolution of the sector will serve as a leitmotiv of this year’s exhibition: “FUTURA” – the face of Autopromotec 2019 – will be taking visitors on a voyage of discovery into the future of vehicle assistance.

Autopromotec, the international automotive equipment and aftermarket trade show held every two years, is making final preparations for its 2019 edition, scheduled to be held May 22-26 in Bologna, Italy. Building on the success of the previous edition, the exhibition is now considered one of the primary biennial international trade shows for all automotive aftermarket product groups: from workshop equipment to spare parts, to tires to car service, as well as lubricants and tools.

The 2017 event saw attendance figures of 113,616 professional operators and 1,599 exhibitors altogether (plus 58 brands represented). Final figures from Autopromotec 2019 will be revealed just before the fair opens; however, the organizers have already noted a 4 percent increase in the number of exhibitors over the 2017 edition. This year’s trade show is even better organized, with sold out halls hosting all sub-sectors of the aftermarket, covering a total area of 162,000 square meters, expanded by 4,000 m2 compared to 2017.

A key focus at Autopromotec 2019 will be the technological evolution driving the automotive sector and currently changing the face of the repair business. The spotlight is on new mobility needs, such as self-driving systems, “connected cars,” electrification and shared mobility and on the consequences of these on the aftermarket.

To highlight the link with the future of the increasingly connected and digitized aftermarket product sector, Autopromotec has created a new image for its 2019 edition: a futuristic galaxy where the constellations represent the different automotive aftermarket sectors and the – not so distant – future of the world of vehicle assistance. “FUTURA” is the protagonist of Autopromotec’s new image, a special guide putting the spotlight on Autopromotec’s aim to represent the crossroads between the past and the future of car repair. At Autopromotec 2019, FUTURA will introduce visitors to the different product sectors, highlighting their distinctive characteristics, and will accompany them on a voyage to discover the most recent technologies offered by the exhibiting companies, in order to give visitors a glimpse into the future of the repairs market.

At Autopromotec 2019, in Hall number 36, this glimpse into the repair market of the future also takes the form of “Officina X.0,” a development of the initiative which, in the previous edition of the trade fair, won wide acclaim among the public: visitors can discover how artificial intelligence, augmented reality and connectivity are already implementable, functional elements in the world of the workshop in the X.0 age. With the “Officina X.0” project, developed in collaboration with Accenture, Autopromotec positions itself as an authoritative leader in the sector, demonstrating excellence in automotive research and the developments in technology and connectivity characterizing the market.

To stay up-to-date with all the new developments regarding Autopromotec 2019, visit http://www.autopromotec.com.

Advertisement
In this article:Autopromotec 2019
Print
Up Next:

Audio Interview: Setting Up Manufacturing And Related Operations In Vietnam

Autopromotec 2019 To Focus On Technological Evolution In the Auto Sector