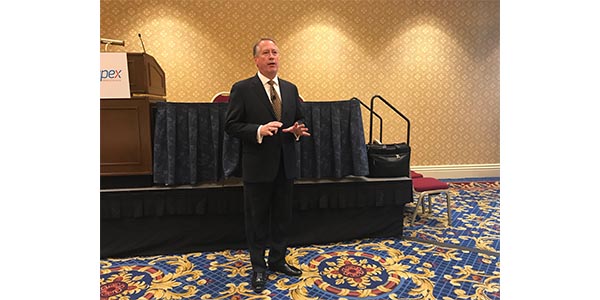 The looming shift to autonomous technology is one of five trends that Seng highlighted in his AAPEX presentation, “Five Trends in Five Minutes: Key Trends Impacting the North American Automotive Aftermarket.”

When automakers shifted from carburetors to fuel injection in the 1980s, it was supposed to be the death knell for the automotive aftermarket. Mark Seng, global aftermarket practice leader for IHS Markit, remembers the predictions of doom.

“Vehicles weren’t going to come back to independent aftermarket repair facilities. People were only going to take these new, fancy, computer-driven cars to the dealership,” Seng recalled during an Oct. 31 presentation at AAPEX 2018 in Las Vegas.

Clearly, the demise of the automotive aftermarket was greatly exaggerated. In the midst of a major shift in automotive technology, aftermarket businesses set about to educate their customers, ultimately convincing them that “we have the trained technicians and the right parts in place to repair these vehicles,” Seng noted.

Facing the specter of another huge shift in technology today – the emergence of advanced driver-assistance systems (ADAS) – Seng believes the aftermarket needs to engage in a similar effort to educate customers.

“We’ve done it before and we can do it again,” Seng added. “In fact, we thrive on change in the aftermarket. That’s what we do best.”

The looming shift to autonomous technology is one of five trends that Seng highlighted in his AAPEX presentation “Five Trends in Five Minutes: Key Trends Impacting the North American Automotive Aftermarket.” Although the buzz about autonomous vehicles is causing some anxiety in the aftermarket – particularly in the collision repair industry – none of the five trends portend doom and gloom. In fact, much of the data from IHS Markit paints a positive picture for the aftermarket over the next decade.

Trend No. 1 – U.S. light-vehicle sales are plateauing – but they’re doing so at record levels.

In 2017, U.S. light-vehicle sales declined for the first time since the Great Recession eight years ago.

IHS Markit predicts 2018 sales will be around 100,000 units lower than last year. Even though sales are flattening, they’re doing so at record levels.

“That’s continuing to spur growth in the total VIO [vehicles in operation], and that’s a great thing for the aftermarket any way you look at it,” Seng asserted.

The U.S. light-vehicle population stands at 272 million units in 2018, and IHS Markit estimates the number will grow 8 percent by 2023.

Trend No. 2 – The vehicle mix is changing rapidly – affecting the aftermarket’s future repair opportunities for years to come.

When customers returned to dealerships in the wake of the 2008-‘09 financial crisis, fewer and fewer of them were shopping for sedans. That trend has continued for the past decade.

In 2017, U.S. sales of sedans hit an all-time low, representing only 35 percent of all light vehicles sold, according to IHS Markit. The research firm expects sedan sales to drop to 30 percent of the light-vehicle market in 2018, with light trucks (pickups and SUVs) accounting for 70 percent of the total market.

Driving the shift is America’s love affair with crossover SUVs such as the Toyota RAV4, Honda CR-V and Ford Escape. IHS Markit sees crossovers continuing to eat away at sedan sales over the next few years, driving total light-truck sales to about 75 percent of the light-vehicle market.

In response to consumers’ lust for SUVs, the automakers plan to increase the number of SUV models by 95 percent between 2015 and 2025, according to IHS Markit’s forecast. That includes mini, subcompact, compact, midsize and full-size SUVs.

Between 2019 and 2025, IHS Markit forecasts 116 million units will be added to the U.S. light-vehicle population. Of those new units, 44 percent will be domestic makes (Chrysler, Ford and General Motors), while 56 percent will be imports, according to IHS Markit.

Perhaps the most dramatic data point is this one: By 2023, IHS Markit predicts import makes will comprise 49 percent of the total U.S. light-vehicle population. That percentage has been on a steady upward trajectory since 2002, when imports represented just 28 percent of U.S. VIO.

“Any way you look at it, that’s a pretty big shift happening in a 280-million vehicle population over a relatively short period of time,” Seng said.

No. 3 – The vehicle population continues to age – impacting the aftermarket sweetspot in a positive way.

The average age of the U.S. light-vehicle fleet is 11.7 years. Behind the numbers, Seng sees some positive trends for the aftermarket.

In 2002, this was the model-year breakdown of the total U.S. light-vehicle fleet:

Fast-forward to 2017, and this is what the fleet looks like:

“That’s a great trend any way you look at it for the aftermarket,” Seng asserted.

Trend No. 4 – Electrification will intensify, but the internal-combustion engine isn’t going away anytime soon.

With autonomous technology grabbing headlines in recent years, the hype surrounding electric vehicles (EVs) has come down from its fever pitch. While electric vehicles aren’t going away, neither is the internal-combustion engine (ICE) – at least not anytime soon.

“The bottom line is our analysts are continually encouraged to understand, question and evaluate all this hype,” and to balance the hype with the research firm’s understanding of OEM production plans and consumer preferences, Seng explained.

Based on what IHS Markit sees, “it’s going to be a while before the ICE goes away,” Seng added.

Today, 94 percent of light-vehicles around the world are powered only by an internal-combustion engine. By 2030, that will drop to 51 percent, according to IHS Markit’s forecast of global light-vehicle production by powertrain type.

However, there’s a huge asterisk to that forecast. Even though IHS Markit expects EV production to increase significantly between now and 2030, most of those electric vehicles will be hybrids – which incorporate an internal-combustion engine. Factoring in the various types of hybrids, 92 percent of vehicles will have an ICE by 2030, according to IHS Markit.

To put the hype in perspective: In the United States today, hybrid EVs account for just 1.8 percent of the VIO.

While the popularity of EVs varies by state – their market share has been growing in California – the overall appetite for EVs has been lukewarm. Seng displayed a graph that tracked EV sales in Georgia over the past decade. The graph shows a steep drop in sales when the state removed a $5,000 buying incentive in 2015.

“Don’t get me wrong: There are people out there who want electric vehicles,” Seng said. “But when you talk about mass numbers that those in the aftermarket have to worry about, consumer demand has been driven very much by incentives.”

No. 5 – Autonomous vehicles are on the horizon, but the supporting technology is here today.

Between 2016 and 2023, HIS Markit projects a 19.2 percent compound annual growth rate for the sensing technologies that support ADAS – camera, radar and lidar. The message to the aftermarket is clear.

“The technology that supports and facilitates autonomous driving is entering repair bays today,” Seng explained. “And it’s increasing at a really fast rate.”

Events: BodyShop Business Names Executives Of The Year At SEMA

Automotive Trends: A Mostly Positive Outlook For The Aftermarket