The 2014 Innovation Award winners were presented at an opening ceremony in Frankfurt. 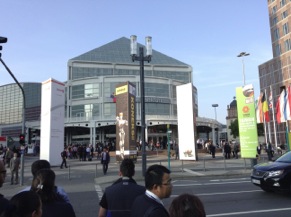 FRANKFURT, Germany — Automechanika Frankfurt 2014, one of the largest automotive trade shows in the world, kicked off today at the sprawling Messe Frankfurt complex here in Frankfurt.

Automechanika Frankfurt, held every two years, draws exhibitors from around the world to Germany, which, with an economy worth approximately $3.5 trillion, is the fourth-largest in the world.

“As the leading international trade fair for the automotive industry, we are on close terms with leading players in all the relevant sectors,” he said.

Dignitaries including Volker Bouffier, the prime minister of the State of Hesse and Peter Feldmann, lord mayor of the city of Frankfurt am Main, were on-hand and addressed the audience. 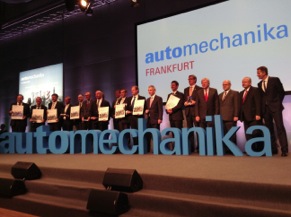 Automechanika officials announced the winners of the 2014 Innovation Awards during the special Tuesday morning opening ceremony.

Continental won the award for its VDO REDI-Sensor in the parts and components category. The TPMS control sensor covers a multitude of vehicle models using only three variations.

TEXA S.p.A won the electronics and systems category for its TMD MK3, a diagnosis system for use in fleets that is connected to the OBD unit. It features integrated 2G, 4G and LTE telephone modules. TEXA S.p.A. also won in the repair and diagnostics category for the company’s augmented reality glasses, which enable technicians to see needed repair information by projecting it from their eyes on to the glasses.

PANNEX AG received the award in the accessories category for its tire sealant. The new environmentally friendly tire sealant is used in emergency repairs. It is fully biodegradable.

MAHA Maschinbau Haldenwang GmbH & Co. KG won in the repair and maintenance category for its MFP 3000 MAHA dynamometer, which permits a vehicle to be test-driven and the safety and driver-assistance systems tested on an auto hoist.

Car-O-Liner AB won in the IT and management category for its Vision 2, a fast, precise and user-friendly software for 3-D measuring systems. It guides technicians through the repair process and carries out measuring and documentation work automatically.

Robert Bosch GmbH won in a special green category for the company’s remanufacture of electronics, which upgrades and reuses electronics rather than having them end up in landfills or pollute the environment.

TRW To Be Acquired By ZF Friedrichshafen

Automechanika Frankfurt 2014 Kicks Off In Germany