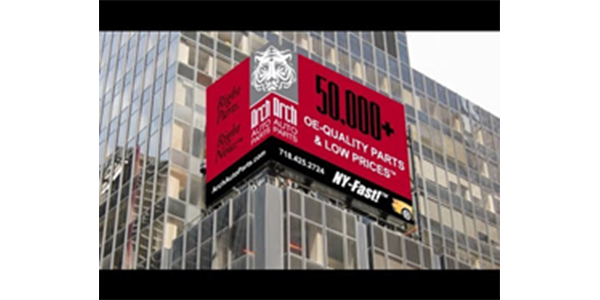 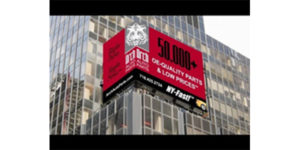 Arch Auto Parts, aftermarket retail and wholesale auto parts supplier in Brooklyn, Queens and Long Island, New York, is celebrating its 40th anniversary with a video billboard in Times Square. Throughout the holidays, including the famous New Year’s Eve celebration, millions of New Yorkers will see the ad promoting Arch Auto as a source for high-quality car parts for domestic and foreign cars. Locally owned Arch Auto Parts has neighborhood stores in Brooklyn, Queens and Long Island. The ad highlights the stores’ “50,000+ OE-quality parts and low prices. NY-Fast!” and spotlights the OE-quality parts Arch stocks from Bosch and DENSO.

“When your friend turns 40 you throw them a big party. When your business turns 40, you get a billboard in Times Square and celebrate at one of the world’s biggest parties,” smiles Chris Bodh, owner and CEO. The Arch Auto Parts ad is running through Jan. 31, 2019, in the heart of the Times Square bowtie area, above the pedestrian-friendly Times Square Plaza. This is where the ball drops on New Year’s Eve, the concerts are staged, and a worldwide audience estimated at more than 1 billion people watch on television as they ring in the New Year.

Last year on New Year’s Eve alone, approximately 2 million people were packed into Times Square, and most of them were there all day to guarantee a spot before the festivities began. Even on typical days, hundreds of thousands of people pass through Times Square daily, and the billboards are one of the main attractions. This year, these commuters, holiday shoppers and New Year’s Eve revelers will see Arch Auto Parts on one of the biggest platforms in the world.

The billboard wraps around a high corner building on Broadway, significantly increasing the visibility of this winter-themed ad. The left side of the billboard animates Arch Auto Parts’ “Right parts, Right now” service promise with a car that stutter-stops in front of an Arch Auto Parts store. Exactly the right parts fly out the door, self-install under the hood and the car zooms off, “NY-Fast!”

The right side of the billboard features Bosch and DENSO, two of Arch Auto Parts’ top suppliers. The first video is for Bosch ICON windshield wiper blades, an excellent wiper for improving visibility in winter sleet and snow. Next, the DENSO ad for spark plugs encourages shivering viewers, “If the weather outside is frightful, let’s go find your happy place,” and “With DENSO, you’re ready,” as a classic cruiser drives down a sunny beach. These ad components all work together to communicate that this winter, Arch Auto Parts is where to find OE-quality auto parts from top-name brands.

In NYC, there is a constant flow of traffic between the boroughs. This is especially true on weekdays, with the population of Manhattan nearly doubling from 1.6 million to 3.1 million people on a typical workday. Many of these commuters come in from Brooklyn, Queens, and Nassau County where Arch Auto Parts has a large presence. These areas also have a high concentration of repair shops, so naturally it is a destination for buying auto parts.

Advertisement
In this article:Arch Auto Parts
Print
Up Next: