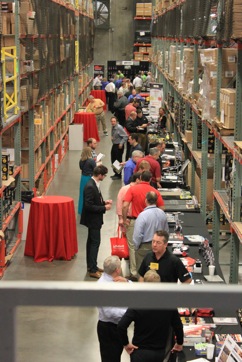 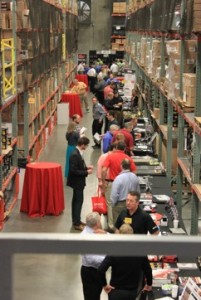 LITTLE ROCK, Ark. – More than 330 attendees assembled in Little Rock, Ark., for the start of Rock the House III, an open house event that brings together the Alliance staff, shareholder owners of the Alliance Parts Warehouse (APW) and their supplier channel partners to explore new ways to pursue mutual successes.

The tri-annual event kicked off Sunday evening at APW with participating supplier channel partners showing and demonstrating their products in a booth show setting. The booth show has grown over the years and has developed into a vital interface with APW staff and suppliers. The event also featured an Arkansas-style barbecue dinner.

“Rock the House was originally conceived as an opportunity to showcase one of the most important strategic sales-, marketing- and business-building tools in the Alliance arsenal, The Alliance Parts Warehouse,” said John Washbish, president and CEO of the Alliance. “This year, with new leadership here at APW the event has become a much more forward-looking and strategic session.”

The new leadership Washbish referred to is Max Dull, who recently assumed the helm at APW as vice president and general manager. He joins the Alliance after a long career with many leading aftermarket companies including Clevite, Dana, Beck/Arnley and MAHLE.

“Our approach to Rock the House is a bit different than in years past,” said Dull. “We plan to spend the majority of our time listening rather than telling.”

Dull went on to say that APW’s mission had historically been to purchase in quantity and serve as a point of consolidation for Alliance shareholders. While he stressed that those tactics will continue, he suggested that the strategic scope of the operation will be expanded.

“For one thing, APW will become a center of product development designed to minimize local market risks of launching new lines for our shareholder owners,” said Washbish.

Today, the event will feature a town hall panel discussion moderated by Washbish with the leadership staff of the Alliance. Following brief opening remarks by each department head, questions and comments will be taken from the shareholder audience. Shareholder input will continue throughout the remainder of the meeting with a series of roundtable discussions that will focus on operational issues, product line extension and expansion, and sales and marketing best practices.

“Our shareholders are the owners of APW. It is crucial that we take the time to get their insight and input about how we best move forward,” said Dull.