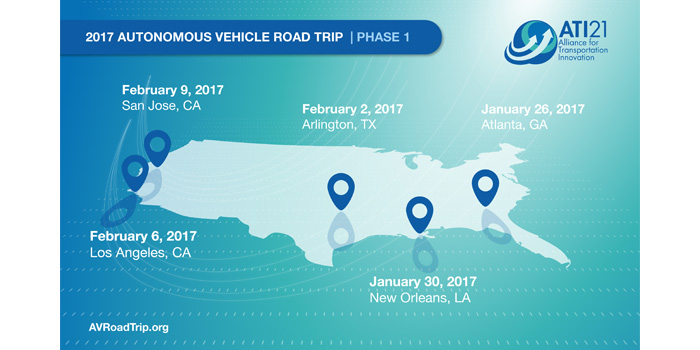 The Washington, D.C.-based association advocates on behalf of the transportation technology industry to accelerate the adoption of innovative technologies that will reduce traffic deaths, improve the flow of urban commutes, safely deliver goods to market, eliminate human error and improve mobility for the underserved, disabled and elderly. 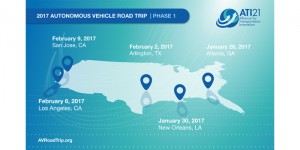 Officials with The Alliance for Transportation Innovation (ATI21.org) announced plans for a coast-to-coast autonomous vehicle road trip, beginning later this month in Atlanta.

The “AV Road Trip,” announced at a news conference held in conjunction with the Consumer Electronics Show (CES) in Las Vegas, will bring self-driving technology directly to the public in cities across America. “There is no doubt that when it comes to self-driving vehicles, seeing is believing,” said Paul Brubaker, president and CEO of ATI21.org. Watch the event on Twitter @ATI21org.

The Washington, D.C.-based association advocates on behalf of the transportation technology industry to accelerate the adoption of innovative technologies that will reduce traffic deaths, improve the flow of urban commutes, safely deliver goods to market, eliminate human error and improve mobility for the underserved, disabled and elderly.

The first stop on the tour is on Jan. 26 in Atlanta , followed closely by appearances in on Jan. 30 in New Orleans; on Feb. 2 in Arlington, Texas; on Feb. 6 in Los Angeles; and on Feb. 9 in San Jose. EasyMile’s EZ10 driverless shuttle will be featured at every stop, allowing community leaders, invited members of the public and the news media to experience the future of transportation. Additional tour stops will be added throughout the year.

At the announcement, Mary Peters, former U.S. Secretary of Transportation, lauded ATI’s efforts on behalf of autonomous technology and decried regulators for not keeping up with the pace of innovation. “Vehicles that drive themselves, and systems that make them safe, are being conceived, invented, tested and refined at speeds that would make our heads spin,” said Peters. “Yet the rules that govern the tech intended to make our lives better, our drive safer and our trips quicker, are stuck in time.”

“We are working to make sure innovation and its potential to make life easier and our streets safer is not frustrated by red tape and regulation,” said Brubaker.

ATI’s chairman, former U.S. Rep. Robert Walker, also attended the news conference. “I’ve been helping craft technology policy for most of my life, but I’ve never seen this amount of excitement. We are witnessing the dawn of a complete transformation of transportation in America,” said Walker, a member of the Trump Administration transition team.

“The autonomous vehicle industry is not just a cool technology or a novelty that will be gone tomorrow,” said Dick Alexander, executive vice president for Transdev North America, the AV Road Trip’s premier sponsor. “Autonomous vehicles are starting to show their worth as a means to lower operating costs, improve customer safety and increase mobility to areas poorly served by traditional mass transit. AV technology will revolutionize how we move people and is here to stay.”

For the latest information about upcoming tour stops and reports from the road, visit AVRoadTrip.org.

Advertisement
In this article:autonomous, road trip
Print
Up Next: