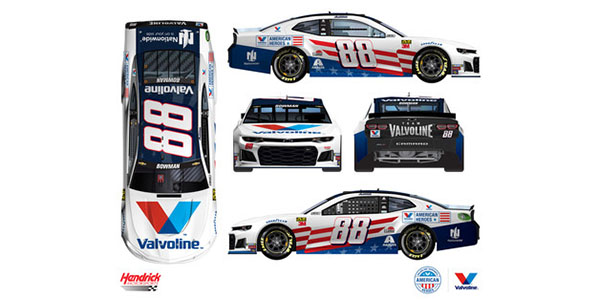 The red, white and blue paint scheme is a culmination of Valvoline’s current American Heroes initiative honoring our nation’s military members and first responders. The program highlights the brand’s 150 years of being American-owned and -operated and its dedication to military support dating as far back as World War II.

“Alex’s paint scheme represents Valvoline’s commitment to those who defend our country and serve its citizens,” said Tim Ferrell, vice president of brand equity and consumer marketing. “We’re thrilled to further our support of military members and first responders by introducing American Heroes this year, and we thank Alex and our partners at Hendrick Motorsports for their support of this initiative.”

As part of the overall campaign, Valvoline business segments are supporting the American Red Cross, Building Homes for Heroes and the Intrepid Fallen Heroes Fund.

More information on how auto racing fans can be part of Valvoline’s American Heroes initiative can be found online at Valvoline.com/AmericanHeroes.

Advertisement
In this article:Motorsports, NASCAR, Valvoline
Print
Up Next: