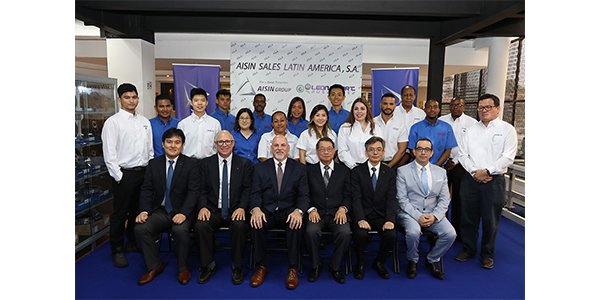 In August 2018, Aisin Group launched its Aftermarket Virtual Company to expand its business. By 2022, the group plans to double its aftermarket sales of 80 Billion JPY (approximately $742 million US) in fiscal year 2018. The company says it will grow sales by expanding and strengthening its global aftermarket structure. ASLA is part of that plan and follows a capital and business connection agreement in Thailand in March 2019, and establishment of an aftermarket sales company in Shanghai in April 2019.

AWA and Leon will consolidate their sales activities in the new company to build an effective framework to provide products and service to existing customers and plan to expand the business in new markets. In addition, as a result of its location near the Central, South American and Caribbean markets, the new company plans to fulfill local product needs through timely collaboration between AWA and the aftermarket division of Aisin Seiki. ASLA will launch a new distribution center and several “Aisin Shops” in countries where additional opportunities exist, as a means to shorten the delivery lead time and to improve service.

ASLA will be led by Scott Turpin, who is also president and CEO of AWA. Turpin said the joint venture between Aisin and Leon has been in the planning stages since August 2018, shortly after the AISIN Group Aftermarket VC was created.

“AWA has more than 25 years of experience with Javier Chiang and Leon Import, S.A., which is one of our original Latin American customers,” said Turpin. “Having a warehouse in Panama allows us to serve customers much faster than shipping from California and will also allow us to expand our customer base. AWA and Leon Import are proven, strategic partners, and we look forward to continued growth and success together.”

Advertisement
In this article:Aisin Group, Panama
Print
Up Next: