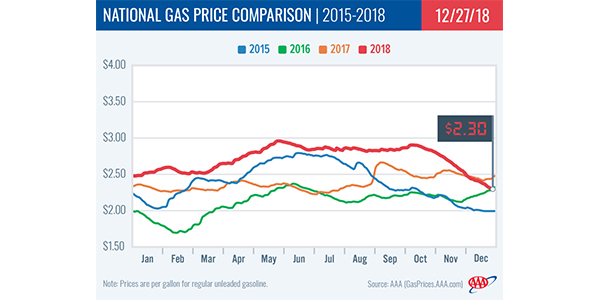 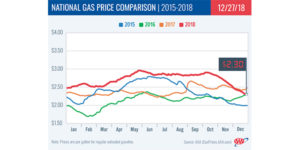 Heading into 2019, gasoline demand is expected to dwindle during the month of January, an expected change following the busy holiday travel season. At the same time, OPEC will begin production cuts on Jan. 1, with hopes that the shift in global supply will push oil prices higher. The effectiveness of the cuts will likely not be known until later in the first quarter.

“All eyes are on OPEC to kick off the year,” said Jeanette Casselano, AAA spokesperson. “Many are waiting to see if they stick to their promise to cut crude production by 1.2-million b/d and if the proposed cuts will be enough to restore balance to the market.”

Over the past few years, OPEC and partnering countries have demonstrated a strong resolve to comply with proposed cuts in production. It is likely that the cartel will reconvene in April, and if there is a need to further balance global supply and demand, OPEC will likely tweak current production numbers at that meeting.

AAA: Gas Prices Fall Below $2 Per Gallon In Nine States