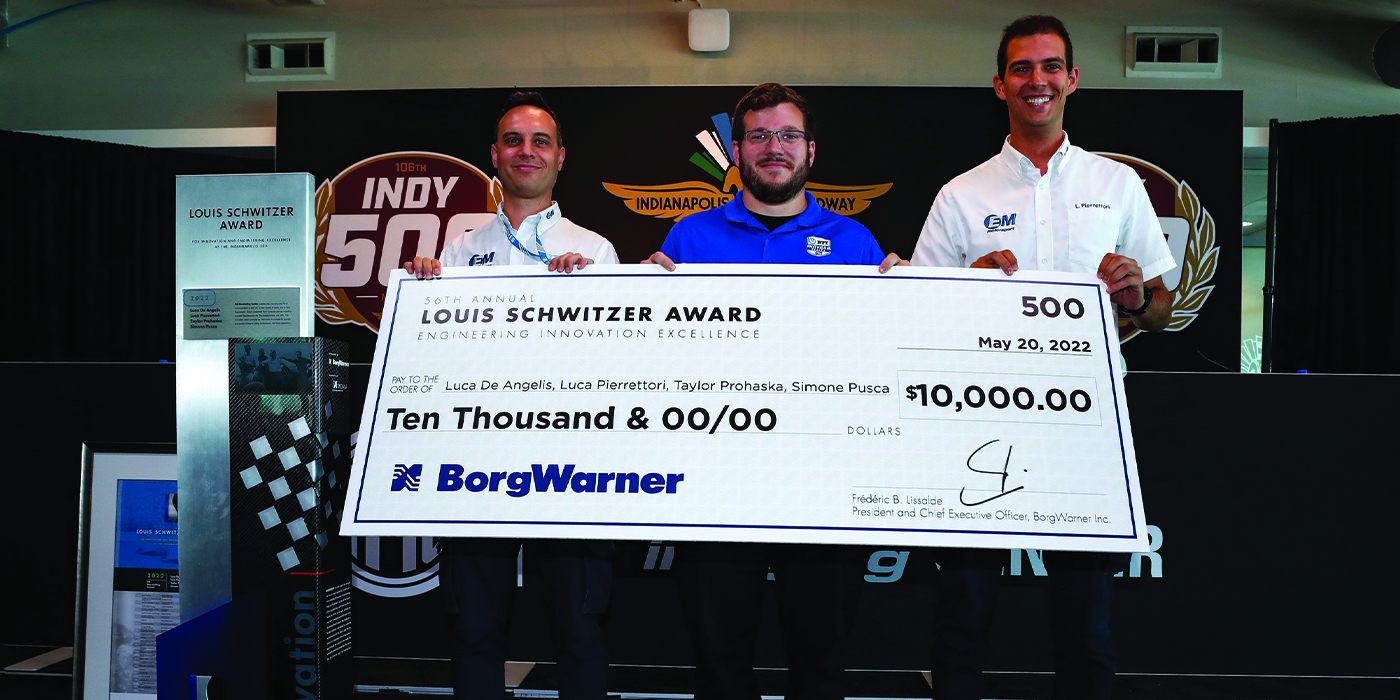 The 56th annual Louis Schwitzer Award was presented to EM Motorsport engineers Luca De Angelis, Luca Pierrettori and Simone Pusca, as well as NTT INDYCAR SERIES engineer Taylor Prohaska for their creative thinking and engineering innovation in bringing the EM Marshalling System to life. This technology has been adopted by INDYCAR and is making a significant impact by providing new, two-way over-the-air communication to each car, team, race control and track flag system. The award, along with a $10,000 prize, was given to De Angelis, Pierrettori, Prohaska and Pusca this week at Indianapolis Motor Speedway by BorgWarner and the Indiana Section of the Society of Automotive Engineers (SAE) International.

“At BorgWarner, it’s important that we not only honor the racers competing to win the Borg-Warner Trophy, but also those who have worked tirelessly to bring new, cutting-edge technology to the racetrack and recognize the crucial role engineers play in driving the innovative future of motorsports,” said Frédéric Lissalde, president and CEO, BorgWarner Inc. “As a proud sponsor of the Louis Schwitzer Award, we congratulate these four talented engineers for their engineering achievements and contributions to the racing industry. As the official turbocharger partner of the NTT INDYCAR SERIES, BorgWarner has a vested interest in witnessing the evolution of this Series’ technology and commend the hard work and engineering excellence that powers it.”

The EM Marshalling System provides key information to increase the quantity and quality of data for safety, performance and future applications. For example, the system improves the visibility of cars on the track for race control. Additionally, the flag types have been animated to better illuminate track conditions to drivers.

Along with celebrating engineering excellence, this award commemorates the spirit of Louis Schwitzer, the winner of the first auto race at Indianapolis Motor Speedway in 1909 and designer of the “Marmon Yellow Jacket” engine that powered the Marmon Wasp to victory during the first Indianapolis 500 in 1911. Schwitzer went on to lead the Indianapolis Motor Speedway technical committee and founded the Schwitzer Corp. in 1918, which was acquired by BorgWarner in 1999 to expand the company’s line of engine cooling systems, turbochargers and more.

BorgWarner’s historical legacy with the Indianapolis 500 runs deep featuring the Borg-Warner Trophy as the main attraction. Each year since 1936, the winner of the big race has had the honor of having their face sculpted and forever engraved onto the iconic trophy, as well as receiving a miniature version of the award known as the “Baby Borg”, as a personal keepsake. BorgWarner’s heritage continues with its EFR™ (Engineered for Racing) turbochargers boosting the engines of every racecar participating in the Indianapolis 500. The turbochargers are built for reliability, featuring Gamma-Ti (titanium aluminide) turbine wheels, stainless steel turbine housings and ceramic ball bearings.

Advertisement
In this article:awards, borgwarner
Print
Up Next:

SMP Cares Initiative Gives Back in 2022
Connect with us