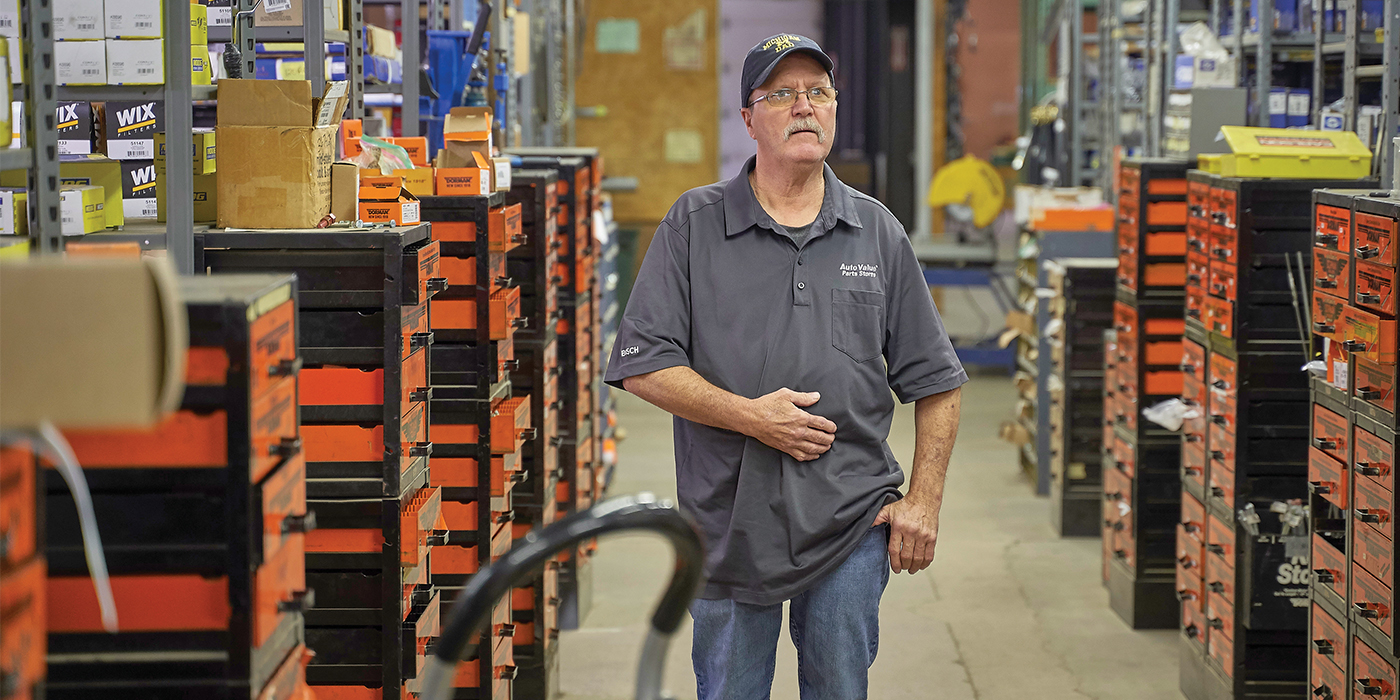 Customers know if they need a part before the sun rises, Bob Carney will be there.

Auto Value Marlette, an Auto-Wares store in the “thumb” of Michigan, officially opens at 6 a.m. But store manager Bob Carney usually rolls in about two hours before that. While he has his own reasons for starting so early (more on that later), it’s been a godsend for the local farmers and contractors whose livelihoods require them to start the day before the sun rises.

“I put the official hours at 6 a.m., but they always know between 4 and 6, if you come in the back door, Bob’s there,” said Carney, the 2020 Counter Professional of the Year. “If you need something, I’ll be there.”

Tom Jones, a district manager for Auto-Wares Group of Companies and Carney’s supervisor, can attest to that.

“I’ve been there at 6 o’clock and there are four people waiting in the driveway,” Jones said. “The farmers have been up and they’ve eaten and worked already.”

While Carney’s loyal customers certainly appreciate the fact that he can help them with their parts needs before the official workday starts, his family was the primary motivation for developing his morning routine. Over the years, Carney and his wife, Theresa, have fostered 45 children – including four boys whom they adopted – in addition to raising two daughters of their own. He decided it was best to get to work early so he could always leave at closing time, “because I knew those kids were at home waiting for me.”

“We devised a plan that dinner would be on the table at 6 o’clock at night, and if you weren’t there, you weren’t going to eat that day,” Carney added. “That kept me in check that I wasn’t going to stay late working.”

Fostering children comes naturally to Carney, who grew up with eight brothers and sisters. When he was a young boy, he remembered a brief period of time when his family couldn’t afford to keep the water on in their home, and Carney and his siblings were placed in foster care.

When Bob and Theresa Carney’s daughters moved out of the house – and he and his wife talked about the possibility of fostering kids – the memories of his childhood experience in foster care were still fresh in his mind.

“Somebody helped me out, so it was just natural that we wanted to help kids,” Carney said.

Helping isn’t the only thing that comes naturally to Carney. His father worked in the auto parts business, and Carney has been tinkering on cars for as long as he can remember.

“I’ve always been a car guy,” he said. “I worked on my own cars. I don’t think I’ve ever taken my cars in to get them repaired. It was always something I did.”

A lifelong Michigander, Carney served in the U.S. Navy until he was 20. When he came home in 1980, his dad helped him get a job at an auto parts store in Burton, Michigan. After working at a wholesale distributor for a few years, Carney found a job with Auto-Wares at Auto Value Marlette, stocking parts in the back room before moving up to the counter. He’s been working there ever since.

“I love the store. I love the customers,” Carney said. “It’s a small town, and they’re really good people and really loyal customers.”

In 2000, Auto Value Marlette needed a manager, and Carney asked for the job.

“The first thing I said was, ‘I will not let you down,’” Carney recalled. “I told them if this doesn’t work, it won’t be from lack of effort.”

Carney got the job, and he delivered on his promises – and then some.

When he took over, Auto Value Marlette was a high-volume store, but its profit margin lagged other Auto-Wares stores. Fast-forward to today, and Jones gushes about the fact that Auto-Value Marlette is one of the company’s most efficient and profitable stores. “Bob’s store puts more money to the bottom line than any other store we have, I believe,” Jones said. Since Carney landed the job as manager, Auto Value Marlette has been the Auto-Wares Store of the Year four times, most recently in 2018. It also has amassed a slew of plaques for wins and top-10 finishes in a number of Auto-Wares categories – from Store Profitability to Employee Productivity.

“That’s no small feat at Auto-Wares, because we have around 200 stores right now,” Jones added.

Marlette, with an estimated population of 2,030 people in 2019, bills itself as “The Heart of the Thumb.” It’s a farming community, as Jones described it, “out in the middle of nowhere.” Yet business is booming, in part because the store has tailored the product mix to the demographics. Auto Value Marlette doesn’t carry a huge inventory of import-car parts, for example, because the region’s vehicle parc skews (heavily) toward pickup trucks.

The store’s bread and butter tends to be categories that other markets would consider “non-traditional,” such as farm/ag. In addition to its thriving farm/ag business, Auto Value Marlette consistently ranks among Auto-Wares’ highest-volume stores for tools, paint and heavy-duty parts, according to Jones.

The product mix is just one part of the equation. Carney and his team – most of whom have been at the store for at least a decade – have established a rock-solid rapport with the local clientele. And they back it up with great service.

“Bob will try to help you out no matter what,” said Wayne Nicol, owner of Nicol Motor Sales, a repair shop in Marlette. “He’ll go above and beyond whatever you need done. If there’s a part he doesn’t have in-house, he’ll send somebody over to the warehouse to get it for us. Nobody else is gonna do that around here.”

For Auto Value Marlette, “above and beyond” has been a boon to the bottom line. Carney credits several of his district managers over the years for teaching him that customers “won’t care so much about price if you give them great service.”

“I had to learn that you can’t be the cheapest person on the corner and be a profitable store,” Carney said. “You have to offer something extra.”

Defining “extra” isn’t so easy, as Carney considers it more of an art than a science. At its core is consistently great customer service, of course. You have to know how to treat your customers, and you have to stay on top of the automotive technology. Carney knows the latter is an ongoing process, and he takes advantage of training opportunities through Auto-Wares and its parts vendors in addition to maintaining his ASE P2 credentials. Carney and his team also make the trip to Grand Rapids, Michigan, for the annual Auto Value/Bumper to Bumper Tech Expo, which gives them the chance to learn about the latest vehicle technology alongside their DIFM customers.

Learning about the customers is just as important.

“You don’t have to ask their name when they call or come in,” Carney said of his customers. “You know them and you know their account number. When they see that, they’re a customer for life, because you took the time to learn everything about them.

“I remember most of my customers when they were 9, 10 years old coming into the store with their parents. They all tell me now, ‘I remember you when you had hair.’ It’s that kind of relationship and friendship you build with them that stays with you forever.”

Part of learning about your customers is understanding what they need. Farm/ag parts is a great example. While it’s hard to find farm/ag parts in most stores, Auto Value Marlette has embraced this niche, and Carney appreciates the category’s high margins. While a customer can call around town to pin down the cheapest oil filter for a passenger vehicle, farm operators don’t have the luxury of comparison shopping, as most parts stores won’t touch farm/ag. That’s why Auto Value Marlette is one of the few in the area to make its own hydraulic hose (up to 2 inches in diameter) – a commonly replaced wear item on tractors and other farm equipment.

“Most of the places around us have gotten out of hydraulic hoses, because it’s an expensive line to have, especially with the influx of imported tractors,” Carney explained. “We just stepped up and said, ‘This is what we have to have,’ and our company has been great about helping us continue to grow the ag line.”

Carney said the biggest thing he’s learned from working at Auto-Wares is, “There’s no ‘I’ in team.” He is grateful to longtime Auto-Wares President and CEO Todd Leimenstoll and General Manager Don Bush “for believing in me to give me my start at Auto-Wares.” He credits Jones, his current supervisor, for playing an instrumental role in Auto Value Marlette becoming one of the company’s most profitable stores. “He’s kind of guided me and helped me do things the right way,” Carney said.

Carney is just as effusive in praising his employees. As the store’s walls started filling up with plaques for various company awards in the early 2000s, Carney asked Auto-Wares to remove his name from them, to emphasize the team’s accomplishments.

“I just really want to thank the crew that I’ve had for so long who have stayed with me for all these years and made Auto Value Marlette a success,” Carney told AMN/Counterman. “It’s not something I did on my own by any means. I’ve had great employees.”

There’s a well-worn maxim that if you love your job, you’ll never work a day in your life. If anybody embodies that adage, it’s Bob Carney.

Carney has been sidelined from work since July, when he went under the knife for the first of two surgeries to repair a torn rotator cuff in each shoulder. Doctors have told him the recovery time is about six months for each shoulder, and the second surgery took place in November. It’s been a painful process for Carney, who emphasized that he’s not “a sit-at-home person.” While he’s hopeful that he can return to work sometime this year, his daughter, Jennifer McMeans, has been performing yeoman’s duty as the store manager in his absence.

Carney said, “The last thing we talked about when I turned over the store to her was, ‘Remember Jenny, just take care of them. Take care of the customer. That’s all you have to do.’”

Advertisement
In this article:Counterperson of the Year
Print
Up Next: