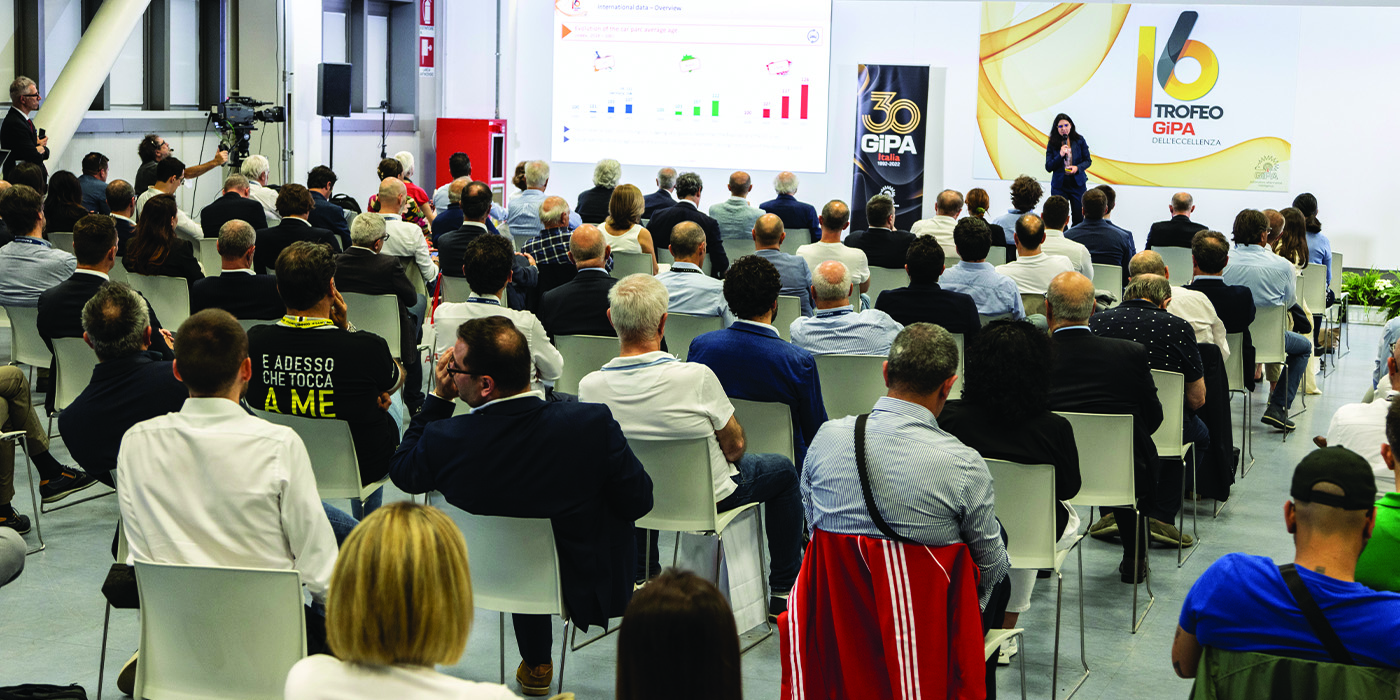 Eleven awards were presented for aftermarket excellence in a turbulent two-year period.

The Autopromotec 2022 edition hosted the awards that recognize the contribution of people, companies and projects to the growth of automotive aftermarket in Italy.

The opening day of Autopromotec 2022 ended, as is now tradition, with the GiPA Excellence Awards, organized by GiPA Italia.

The GiPA Excellence Awards, now in their 16th edition, reflect the company’s extensive knowledge of the aftermarket in Italy and all its players, acquired from more than 30 years of analyzing the sector dynamics.

GiPA has particularly excelled over the past two years by supporting companies with detailed and constantly updated information on the pandemic’s impact on after-sales activities, promptly sharing its reports with the entire supply chain.

The 11 awards handed out by GiPA in 2022 reflect the change that has taken place and is still ongoing, and above all recognize the companies and people that have succeeded in changing business paradigms, seeking to support the supply chain with innovative activities and tools. As in the past, winners of the 11 awards were decided in various ways, with face-to-face interviews, telephone interviews, CAWI surveys (web-based questionnaires), voting by the GiPA committee and trade magazines.

The award for the “AM Development Strategy – A New Model” category went to spare parts distributor S.D.R for having built a company that profitably merges the spare parts turnover of many dealerships, expanding the distribution of spare parts from the initial brands of the Stellantis Group to those of other original equipment manufacturers, targeting not only the official networks but also the independent market.

For the category “AM Development Strategy – Unity is Strength,” the award went to AsConAuto – Associazione Consorzi Concessionari Autoveicoli (Car Dealers Association) in recognition for: “Inventing, reinventing, adapting a model that allowed manufacturers’ spare parts to follow the course of the ageing fleet.”

For the “IAM Communication Strategy – Distribution” category, it was the Assoricambi Consortium that won the award, judged best able, from March 2020, to interpret the digital world “mantra,” with the strong belief that “Those who help influence, influence sales.”

The “IAM Development Strategy – National Distribution” category saw the award-winning organization Autodis Italia recognized for its “pragmatic and consistent creation of a new environment based on economically sustainable companies in the world of IAM distribution, successfully weathering the storm.”

For the “Leading workshop modernization” category, the award was given to ARVAL for “Breaking the mould, shifting the paradigm and inventing a new way where privilege is not reserved for the few. And when this design leads to a modernized workshop, it becomes a model for other markets, with entire aftermarket benefits. ARVAL did not invent multi-service, but they made it their own.”

In the “OES Network Satisfaction” category, Italian motorists interviewed by GiPA Italia gave the award for Generalist Networks to Renault Italy, and for Premium Networks to Volvo Italy.

For “IAM System Strategy – Distribution,” it was the Telos Group company that took the award, “for taking building a large and successful spare parts team to an extremely high level, offering an excellent level of service to garages.”

Groupauto Italia and its ProMeK management software were awarded in the “IAM Development Strategy – Workshops” category in recognition that: “ProMeK is the tool that enabled the evolution from workshop network to aftermarket community. A powerful tool to bring the supply chain into the workshop 4.0 era.”

The “Coup de Coeur,” awarded by the GiPA committee to aftermarket professionals who stand out for their winning choices and contribution to the growth of this industry, was given to Nicola Giardino, for his “extraordinary, unblemished and incredibly successful career.”

The “Press Award,” awarded by journalists from leading trade publications, closed the evening event. They recognized Paolo Scudieri, an entrepreneur who turned the family business around and also managed to devote time and energy to a prestigious association such as ANFIA – Associazione Nazionale Filiera Industria Automobilistica (National Association of the Automotive Industry).

Advertisement
In this article:Autopromotec, awards
Print
Up Next: