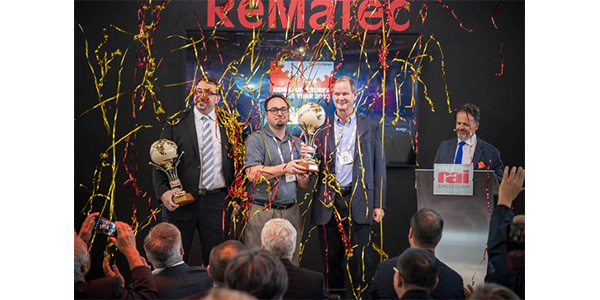 The show’s opening ceremony announced the Remanufacturer of the Year Awards, which recognized the achievements of Knorr-Bremse, CRP Industries and Fernand Weiland (FJW Consulting).

This year’s ReMaTec at RAI Amsterdam brought reman recognition to a whole new level. The show’s opening ceremony announced the Remanufacturer of the Year Awards, which recognized the achievements of Knorr-Bremse, CRP Industries and Fernand Weiland (FJW Consulting). The InnovationLAB and the ReMaTec Theatre were particularly popular with special keynotes from MAHLE, Volvo and PwC Autofacts. An industry dinner at a historical venue at Dam Square in Amsterdam brought OEMs and remanufacturers together for the first time to discuss the changes that will disrupt the future of the reman industry.

During ReMaTec 2019 in Amsterdam, visitors were able to enjoy Keynote and Expert sessions, and a Live Demo on Augmented Reality (AR). There were side events held during the show, including the International Conference on Remanufacturing (ICoR), the Dutch Aftermarket Day and the 1st International Forum on Wind Turbine Remanufacturing, to name a few. Four out of five visitors who attended the show were international visitors, which brought the global reman industry to Amsterdam.

While visitors and exhibitors were conducting business on the show floor, the InnovationLAB was full of professionals ready to take on new insights from the industry. The ReMaTec Theatre welcomed an engaged audience, which gave way to interactive Q&As during keynotes from MAHLE, Volvo and PwC Autofacts.

Remanufacturer of the Year Awards

The Remanufacturer of the Year (RotY) Awards recognize the achievements in technical excellence, commitment to quality, impact on the reman industry and customer service. On the opening day of the show, this year’s winners are Knorr-Bremse (Best Reman Process Optimization), CRP Industries (Best Reman Business Innovation) and Best Reman Ambassador was awarded to Fernand Weiland (FJW Consulting).

Understanding The Future Of The Reman Industry

The first keynote on “Dual Strategy for Powertrain Development of Internal Combustion,” was given by Christoph Dutschke, technical coordinator of trainings at MAHLE Aftermarket. Dutschke took the audience along on MAHLE’s vision for what the future of drivetrain will be.

Volvo’s Dick Cruslock, strategy and programme manager, Global Customer Service, gave a keynote on Volvo’s remanufacturing programme, which restores replaced parts to their original specifications. Cruslock’s speech drew many visitors and exhibitors to the ReMaTec Theatre and an interested Q&A with the audience concluded the highly appreciated speech.

Christoph Stürmer, global lead analyst at PwC Autofacts, gave a keynote on Tuesday on the “5 Trends Transforming the Automotive Industry.” He discussed the generic types of mobility and the demand for mobility transformation and regulations based on demographic dynamics and urbanization. Sturmer said he noticed people “are very interested in understanding the future of their industry.” He continued by explaining that “the opportunity of the remanufacturing industry is going to shift from fixing parts that are already broken to replacing and refurbishing parts that are outdated or need a technical change.”

New to this year’s event was the high-end industry dinner at the “Royal Industrial Society Club” in Amsterdam. A total of 75 leaders in the remanufacturing industry and OEMs were invited to connect with each other during a dinner at a historical location at the Dam square facing the Royal Palace.

Next Venture Of ReMaTec In China

ReMaTec organizers announced the event will expand to China and it will be the first remanufacturing fair of the country. The launch edition of Rematec Asia is going to take place from Sept. 24-26 in Guangzhou.

The Remanufacturer of the Year (RotY) Awards are the most prestigious awards of the industry for Best Reman Business Innovation, Process Optimization and Reman Ambassador

Adam Hill, editor of ReMatecNews, announced the winners of the Remanufacturer of the Year Awards during the award ceremony at ReMaTec 2019. Judged by a panel of remanufacturing industry experts on a set of criteria, the following winners are deemed to lead the industry forward.

The jury said that “Knorr-Bremse’s fully-digitalized core return and sorting process satisfies customer and remanufacturing process demands: operators now use touchscreens to identify and sort cores, with 1,500 part numbers handled, in a system which is integrated into SAP with a real-time view of all sorting data and stock. The judges were impressed by a complete process which allows a full track and trace from the customer’s pick-up request, goods receipt and core identification up to surcharge refund booking.”

Daniel Koehler, remanufacturing director of Knorr-Bremse, explained that “it’s a very nice appreciation from the community and the experts that honor and recognize all the efforts that Knorr-Bremse has done in the past few years. We implemented, about six or seven years ago, remanufacturing in our overall aftermarket strategy to make it a real pillar. We have a full reman plan and we have our own reman programme brand, which is called EconX.”

The jury stated “CRP Industries is the parent company of Atlantic Automotive Enterprise, a remanufacturer of electrical power steering systems. Its introduction of lean principles and semi-automation to its supply chain management system – often a challenging task to perform – impressed the judges. These innovations have been implemented in most of the company’s reman process steps and have been shown to have a really positive effect on efficiency, supporting an aggressive EPS launch plan.”

“This is very exciting for CRP. We are a third-generation family owned company, and we are a smaller company in the reman industry. We recognize what competition we have is in terms of companies that have been remanufacturing for decades, which are some very big names. We’ve been doing this since 2015 and we believe we are at the forefront of technology in what we do and it’s great to be recognized for that,” said Scott Shea, chief operating officer at CRP Industries Inc.

“A co-founder of the ReMaTec exhibition, Fernand Weiland has been in management positions responsible for aftermarket and remanufacturing operations over the past 30 years or so with companies including Bendix, Lucas and TRW. In 1989, he founded APRA’s European division and served as chairman for more than 20 years. From 1990 to 2012 he organized a considerable number of APRA forums, workshops and exhibitions across Europe – and as a consultant he has published many articles and several books on reman.”

The Jury believes that “he [Fernand] has worked tirelessly to exchange knowledge and promote remanufacturing to businesses and policymakers – and the industry has no better friend than Fernand.”

Fernand Weiland was unfortunately not able to attend the awards ceremony in order to receive the RotY Award in person. He reacted to his win by saying, “It is a great honor for me and a great pleasure today to receive the prestigious RotY Award for Ambassador. In my long career in remanufacturing, I got a lot of satisfaction to work with the reman family. In the past we have celebrated many events, but I must say today is one of the biggest for me if not the biggest.”

Remanufacturer of the Year Awards

ReMaTecNews’ Remanufacturer of the Year Award is the most prestigious honor in remanufacturing. Founded in 2005 and now in its 14th year, the prize is given to a person or business that has served remanufacturing with particular distinction. Over its lifetime, the award has celebrated the achievements of some of the reman industry’s most prominent names. Within the industry it is considered a milestone. The Jury includes the following members:

Audio Interview: China – The Future Of New And Smart Mobility